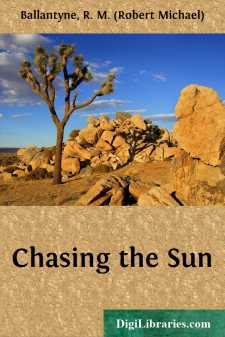 Preparations for the Chase.

Fred Temple was a tall, handsome young fellow of about five-and-twenty.

He had a romantic spirit, a quiet gentlemanly manner, a pleasant smile, and a passionate desire for violent exercise. To look at him you would have supposed that he was rather a lazy man, for all his motions were slow and deliberate. He was never in a hurry, and looked as if it would take a great deal to excite him. But those who knew Fred Temple well used to say that there was a great deal more in him than appeared at first sight. Sometimes a sudden flush of the brow, or a gleam of his eyes, told of hidden fires within.

Fred, when a small boy, was extremely fond of daring and dangerous expeditions. He had risked his life hundreds of times on tree-tops and precipices for birds’ nests, and had fought more hand-to-hand battles than any of the old Greek or Roman heroes. After he became a man, he risked his life more than once in saving the lives of others, and it was a notable fact that many of the antagonists of his boyhood became, at last, his most intimate friends.

Fred Temple was fair and ruddy. At about the age of nineteen certain parts of his good-looking face became covered with a substance resembling floss-silk. At twenty-five this substance had changed into a pair of light whiskers and a lighter moustache. By means of that barbarous custom called shaving he kept his chin smooth.

Fred’s father was a wealthy Liverpool merchant. At the period when our tale opens Fred himself had become chief manager of the business. People began, about this time, to say that the business could not get on without him. There were a great number of hands, both men and women, employed by Temple and Son, and there was not one on the establishment, male or female, who did not say and believe that Mr Frederick was the best master, not only in Liverpool, but in the whole world. He did not by any means overdose the people with attentions; but he had a hearty offhand way of addressing them that was very attractive. He was a firm ruler. No skulker had a chance of escape from his sharp eye, but, on the other hand, no hard-working servant was overlooked.

One day it was rumoured in the works that Mr Frederick was going to take a long holiday. Since his appointment to the chief charge, Fred had taken few holidays, and had worked so hard that he began to have a careworn aspect, so the people said they were “glad to hear it; no one in the works deserved a long holiday better than he.” But the people were not a little puzzled when Bob Bowie, the office porter, told them that their young master was going away for three months to chase the sun!

“Chase the sun, Bob! what d’ye mean?” said one. “I don’t know wot I mean; I can only tell ye wot I say,” answered Bowie bluntly.

Bob Bowie was an old salt—a retired seaman—who had sailed long as steward of one of the ships belonging to the House of Temple and Son, and, in consequence of gallantry in saving the life of a comrade, had been pensioned off, and placed in an easy post about the office, with good pay....