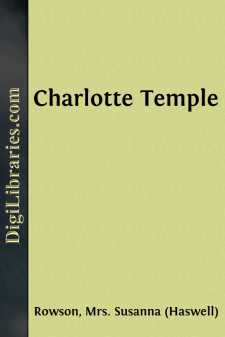 CHAPTER I. A BOARDING SCHOOL.

"ARE you for a walk," said Montraville to his companion, as they arose from table; "are you for a walk? or shall we order the chaise and proceed to Portsmouth?" Belcour preferred the former; and they sauntered out to view the town, and to make remarks on the inhabitants, as they returned from church.

Montraville was a Lieutenant in the army: Belcour was his brother officer: they had been to take leave of their friends previous to their departure for America, and were now returning to Portsmouth, where the troops waited orders for embarkation. They had stopped at Chichester to dine; and knowing they had sufficient time to reach the place of destination before dark, and yet allow them a walk, had resolved, it being Sunday afternoon, to take a survey of the Chichester ladies as they returned from their devotions.

They had gratified their curiosity, and were preparing to return to the inn without honouring any of the belles with particular notice, when Madame Du Pont, at the head of her school, descended from the church. Such an assemblage of youth and innocence naturally attracted the young soldiers: they stopped; and, as the little cavalcade passed, almost involuntarily pulled off their hats. A tall, elegant girl looked at Montraville and blushed: he instantly recollected the features of Charlotte Temple, whom he had once seen and danced with at a ball at Portsmouth. At that time he thought on her only as a very lovely child, she being then only thirteen; but the improvement two years had made in her person, and the blush of recollection which suffused her cheeks as she passed, awakened in his bosom new and pleasing ideas. Vanity led him to think that pleasure at again beholding him might have occasioned the emotion he had witnessed, and the same vanity led him to wish to see her again.

"She is the sweetest girl in the world," said he, as he entered the inn. Belcour stared. "Did you not notice her?" continued Montraville: "she had on a blue bonnet, and with a pair of lovely eyes of the same colour, has contrived to make me feel devilish odd about the heart."

"Pho," said Belcour, "a musket ball from our friends, the Americans, may in less than two months make you feel worse."

"I never think of the future," replied Montraville; "but am determined to make the most of the present, and would willingly compound with any kind Familiar who would inform me who the girl is, and how I might be likely to obtain an interview."

But no kind Familiar at that time appearing, and the chaise which they had ordered, driving up to the door, Montraville and his companion were obliged to take leave of Chichester and its fair inhabitant, and proceed on their journey.

But Charlotte had made too great an impression on his mind to be easily eradicated: having therefore spent three whole days in thinking on her and in endeavouring to form some plan for seeing her, he determined to set off for Chichester, and trust to chance either to favour or frustrate his designs....