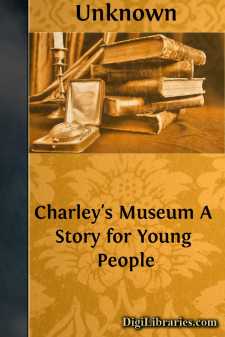 Charley Carter was a bright, active lad, of twelve years old, the son of a farmer, who lived a few miles distant from Philadelphia. He was a very great favorite of his uncle Brown, his mother's brother, who was a wealthy merchant in the city. He was also a favorite of another brother of his mother, who had been, for many years a sea captain, sailing to all parts of the world. So, you see, our Charley, with a kind father and mother, and two such uncles, was very well provided for.

Charley was a lively, inquiring boy, who liked to find out all he could about the animals he saw, whether they flew through the air, or swam through the water, or walked on the ground, or crawled in the dirt.

Luckily for our Charley, his uncle Brown had had, from boyhood, the same taste for Natural History, which our little friend was beginning to have, and you can imagine how pleased his uncle was to see this taste in his little nephew. Our sea captain was pleased also, and so was his father, and all three of them together, determined that our little boy should have the opportunity and the means to cultivate his taste.

So, as Mr. Carter had a big attic to his house, with two good sized windows fronting the south, he got a carpenter and had a nice room made for Charley, that should be his own Museum. Don't you think our Charley was pleased, that his father was so kind to him? When the room was all finished, uncle Brown, who had, for a long time, a bit of a Museum in his own house, in the city, brought out, one day, a lot of shells to begin our Charley's Museum, with. And now I must try to tell something about these shells, and the creatures who used to have their homes in them. (But first I must tell you one thing, if you hav'nt guessed it already, that as soon as Charley began to lisp his words, his kind mother took him in her lap and taught him to repeat the Lord's Prayer, and, I can tell you, Charley, as he grew older, never went to sleep at night, until he had addressed this prayer to the great, good Being, who made and takes care of all of us. Remember this, boys, for it is of more consequence than shells, or animals, or anything else.)

The first shell that Uncle Brown gave to Charley, was what is called a "money-cowry." It is an elegant shaped and beautifully marked shell and takes its name from the fact, that one species of them is used as money, both in Bengal and Guinea, two places at a vast distance from each other. The value of these shells is small, in comparison with that of gold and silver, three thousand two hundred cowries amounting to a rupee, which equals fifty cents of our coin.

Next came a shell that Charley thought had a very funny name, "the Royal Staircase Wentle-trap." However, it was a very handsome shell, that uncle sea captain brought to uncle Brown from the far off Chinese and Indian seas, where the animals live. In old times this shell was prized so highly, that one, two inches long, sold for five hundred dollars. And, even now, a fine specimen brings from thirty to thirty-five dollars. This shell Mr. Brown said, belongs to the class Turbo or Turbinidæ. The fisherman call all of this class, whelks.

After this, came another rather queer-named shell, the animal that lived in it, being called the "Common Whelk," and belonging to a class of creatures entitled Buccinidae, from the Latin name for trumpet, because they were thought to look like a trumpet....