Charley Laurel A Story of Adventure by Sea and Land 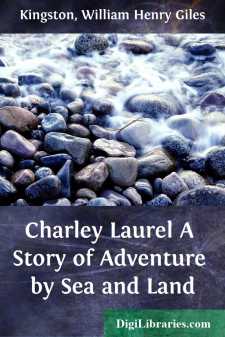 A good many years ago, before, indeed, I can remember, His Majesty’s Ship Laurel, a corvette of eighteen guns and a hundred and thirty men, commanded by Captain Blunt, formed one of the West India squadron.

She, with another corvette, and a brig in company, came one fine morning off a beautiful island, then in possession of the French, although, as Dick Driver, from whom I got the particulars, said, properly belonged to England, at least, it once had. Of course, therefore, it was their business to get it back again. Dick could not recollect its name, nor the exact date of the occurrences I am describing, for, being no scholar, he was a very bad hand at recollecting dates; and as he could not write his own name, of course it was not to be expected that he would keep a journal, or remember very accurately all the places he had visited.

The Laurel and her consorts, having hoisted French colours, stood along the coast, which the captain and officers of the former ship narrowly examined with their glasses.

At length the shades of evening drew on, and they came off a small town, situated on the shore of a bay, the entrance of which was guarded by a fort. The Laurel stood on, as if about to enter the bay, but the land-wind coming off the shore, she and the other two vessels stood away till they had got such a distance from the harbour that there was no chance of their being seen by the sharpest eyes, with the best of night-glasses, looking out for them.

The ships having hove-to, the commanders of the other vessels came on board the Laurel, when Captain Blunt announced his intention of attacking the town, hoping to hold possession of it till another squadron, which had been destined for the purpose, had captured a more important place on the other side of the island. The captain’s plan was to send in the different boats of the squadron with a strong party of marines and blue-jackets, in three divisions, a couple of hours before daylight, as it was hoped at that time, the garrison of the fort being less on the alert than at an earlier hour, the boats might enter the bay unperceived.

The first and largest division was instructed to take possession of the town; the second was to attack the fort; and the third to cut out any vessels found in the harbour, in case the other two should be compelled to retreat, so that, at all events, there might be something to show for the night’s work.

The boats’ crews, and all who were fortunate enough, as they considered it, to be selected for the expedition, were soon busily employed in sharpening cutlasses, fitting fresh flints to their pistols, and making other preparations for the possible bloody work in which they were to be engaged. Dick Driver, who belonged to the cutter’s crew, was among the most active. Dick was a short, strongly built, powerful fellow, with a broad, honest countenance, bright blue eyes, and fair bushy beard and whiskers,—a truer-hearted, braver seaman than Dick Driver never stepped.

“If this here cutlass of mine does its duty, we’ll thrash the Mounseers, and gain the King his own again,” exclaimed Dick, as he applied his weapon to the grindstone, feeling that he was a host in himself; and so he was, provided no treacherous bullet found its way through his sturdy frame, when, alas, Dick’s strength and courage would have availed him nothing....