by Ethel M. (Ethel May) Dell 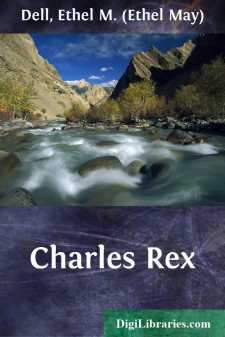 "I shall go to sea to-morrow," said Saltash, with sudden decision. "I'm tired of this place, Larpent,—fed up on repletion."

"Then by all means let us go, my lord!" said Larpent, with the faint glimmer of a smile behind his beard, which was the only expression of humour he ever permitted himself.

"Believe you're fed up too," said Saltash, flashing a critical look upon him.

Captain Larpent said nothing, deeming speech unnecessary. All time spent ashore was wasted in his opinion.

Saltash turned and surveyed the sky-line over the yacht's rail with obvious discontent on his ugly face. His eyes were odd, one black, one grey, giving a curiously unstable appearance to a countenance which otherwise might have claimed to possess some strength. His brows were black and deeply marked. He had a trick of moving them in conjunction with his thoughts so that his face was seldom in absolute repose. It was said that there was a strain of royal blood in Saltash, and in the days before he had succeeded to the title when he had been merely Charles Burchester, he had borne the nickname of "the merry monarch." Certain wild deeds in a youth that had not been beyond reproach had seemed to warrant this, but of later years a friend had bestowed a more gracious title upon him, and to all who could claim intimacy with him he had become "Charles Rex." The name fitted him like a garment. A certain arrogance, a certain royalty of bearing, both utterly unconscious and wholly unfeigned, characterized him. Whatever he did, and his actions were often far from praiseworthy, this careless distinction of mien always marked him. He received an almost involuntary respect where he went.

Captain Larpent who commanded his yacht The Night Moth—most morose and unresponsive of men—paid him the homage of absolute acquiescence. Whatever his private opinions might be, he never expressed them unless invited to do so by his employer. He never criticized by word or look. Saltash was wont to say that if he decided to turn pirate he believed that Larpent would continue at his post without the smallest change of front. To raise a protest of any sort would have been absolutely foreign to his nature. He was made to go straight ahead, to do his duty without question and with perfect self-reliance.

On the present occasion, having cruised from port to port in the Mediterranean for nearly six weeks, it was certainly no ill news to him to hear that Saltash had at last had enough. The weather was perfect, too perfect for a man of his bull-dog instincts. He was thoroughly tired of the endless spring sunshine and of the chattering, fashionable crowds that Saltash was wont to assemble on the yacht. He was waiting with an iron patience for the word that should send them forth over the great Atlantic rollers, with the ocean spray bursting over their bows and the sting of the ocean wind in their faces. That was the sort of life that appealed to him. He had no use for civilization; the froth of society had no attraction for him....