Charles I Makers of History 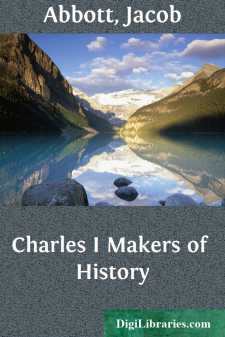 They who have read the history of Mary Queen of Scots, will remember that it was the great end and aim of her life to unite the crowns of England and Scotland in her own family. Queen Elizabeth was then Queen of England. She lived and died unmarried. Queen Mary and a young man named Lord Darnley were the next heirs. It was uncertain which of the two had the strongest claim. To prevent a dispute, by uniting these claims, Mary made Darnley her husband. They had a son, who, after the death of his father and mother, was acknowledged to be the heir to the British throne, whenever Elizabeth's life should end. In the mean time he remained King of Scotland. His name was James. He married a princess of Denmark; and his child, who afterward was King Charles the First of England, was born before he left his native realm.

King Charles's mother was, as has been already said, a princess of Denmark. Her name was Anne. The circumstances of her marriage to King James were quite extraordinary, and attracted great attention at the time. It is, in some sense, a matter of principle among kings and queens, that they must only marry persons of royal rank, like themselves; and as they have very little opportunity of visiting each other, residing as they do in such distant capitals, they generally choose their consorts by the reports which come to them of the person and character of the different candidates. The choice, too, is very much influenced by political considerations, and is always more or less embarrassed by negotiations with other courts, whose ministers make objections to this or that alliance, on account of its supposed interference with some of their own political schemes.

Getting married by proxy.

As it is very inconvenient, moreover, for a king to leave his dominions, the marriage ceremony is usually performed at the court where the bride resides, without the presence of the bridegroom, he sending an embassador to act as his representative. This is called being married by proxy. The bride then comes to her royal husband's dominions, accompanied by a great escort. He meets her usually on the frontiers; and there she sees him for the first time, after having been married to him some weeks by proxy. It is true, indeed, that she has generally seen his picture, that being usually sent to her before the marriage contract is made. This, however, is not a matter of much consequence, as the personal predilections of a princess have generally very little to do with the question of her marriage.

Now King James had concluded to propose for the oldest daughter of the King of Denmark and he entered into negotiations for this purpose. This plan, however, did not please the government of England, and Elizabeth, who was then the English queen, managed so to embarrass and interfere with the scheme, that the King of Denmark gave his daughter to another claimant....