Charles Dickens as a Reader 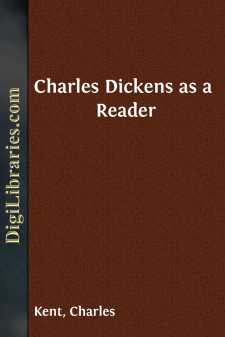 As the title-page of this volume indicates, no more is here attempted than a memorial of Charles Dickens in association with his Readings. It appeared desirable that something in the shape of an accurate record should be made of an episode in many respects so remarkable in the career of the most popular author of his generation. A commemorative volume, precisely of this character, was projected by the writer in the spring of 1870. Immediately after the Farewell Reading in St James's Hall, on the 15th of March, Charles Dickens wrote, in hearty approval of the suggestion, "Everything that I can let you have in aid of the proposed record (which, of course, would be far more agreeable to me if done by you than by any other hand) shall be at your service." All the statistics, he added, should be placed freely at the writer's command; all the marked books from which he himself read should be confided to him for reference. In now realising his long-postponed intention, the writer's endeavour has been throughout to restrict the purpose of his book as much as possible to matters either directly or indirectly affecting these famous Readings.

The Biography of Charles Dickens having been undertaken by the oldest and dearest of his friends, all that is here attempted is to portray, as accurately as may be, a single phase in the career and character of one of the greatest of all our English Humorists. What is thus set forth has the advantage, at any rate, of being penned from the writer's own intimate knowledge. With the Novelist's career as a Reader he has been familiar throughout. From its beginning to its close he has regarded it observantly. He has viewed it both from before and from behind the scenes, from the front of the house as well as from within the shelter of the screen upon the platform. When contrasted with the writings of the Master-Humorist, these readings of his, though so remarkable in themselves, shrink, no doubt, to comparative insignificance. But simply considering them as supplementary, and, certainly, as very exceptional, evidences of genius on the part of a great author, they may surely be regarded as having been worthy of the keenest scrutiny at the time, and entitled afterwards to some honest commemoration.

CHARLES DICKENS AS A READER.

A celebeated writer is hardly ever capable as a Reader of doing justice to his own imaginings. Dr. Johnson's whimsical anecdote of the author of The Seasons admits, in point of fact, of a very general application. According to the grimly humorous old Doctor, "He [Thomson] was once reading to Doddington, who, being himself a reader eminently elegant, was so much provoked by his odd utterance, that he snatched the paper from his hand, and told him that he did not understand his own verses!" Dryden, again, when reading his Amphytrion in the green-room, "though," says Cibber, who was present upon the occasion, "he delivered the plain meaning of every period, yet the whole was in so cold, so flat, and unaffecting a manner, that I am afraid of not being believed when I affirm it." Elsewhere, in his Apology, when contrasting the creator with the interpreter, the original delineator with the actual impersonator of character, the same old stage gossip remarks, how men would read Shakspere with higher rapture could they but conceive how he was played by Betterton!...