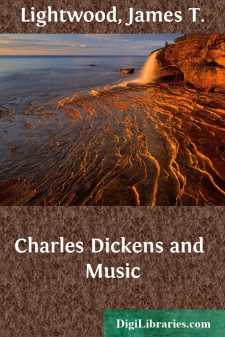 CHAPTER IDICKENS AS A MUSICIAN

The attempts to instil the elements of music into Charles Dickens when he was a small boy do not appear to have been attended with success. Mr. Kitton tells us that he learnt the piano during his school days, but his master gave him up in despair. Mr. Bowden, an old schoolfellow of the novelist's when he was at Wellington House Academy, in Hampstead Road, says that music used to be taught there, and that Dickens received lessons on the violin, but he made no progress, and soon relinquished it. It was not until many years after that he made his third and last attempt to become an instrumentalist. During his first transatlantic voyage he wrote to Forster telling him that he had bought an accordion.

The steward lent me one on the passage out, and I regaled the ladies' cabin with my performances. You can't think with what feelings I play ‘Home, Sweet Home’ every night, or how pleasantly sad it makes us.

On the voyage back he gives the following description of the musical talents of his fellow passengers:

One played the accordion, another the violin, and another (who usually began at six o'clock a.m.) the key bugle: the combined effect of which instruments, when they all played different tunes, in different parts of the ship, at the same time, and within hearing of each other, as they sometimes did (everybody being intensely satisfied with his own performance), was sublimely hideous.

He does not tell us whether he was one of the performers on these occasions.

But although he failed as an instrumentalist he took delight in hearing music, and was always an appreciative yet critical listener to what was good and tuneful. His favourite composers were Mendelssohn—whose Lieder he was specially fond of—Chopin, and Mozart. He heard Gounod's Faust whilst he was in Paris, and confesses to having been quite overcome with the beauty of the music. ‘I couldn't bear it,’ he says, in one of his letters, ‘and gave in completely. The composer must be a very remarkable man indeed.’ At the same time he became acquainted with Offenbach's music, and heard Orphée aux enfers. This was in February, 1863. Here also he made the acquaintance of Auber, ‘a stolid little elderly man, rather petulant in manner.’ He told Dickens that he had lived for a time at ‘Stock Noonton’ (Stoke Newington) in order to study English, but he had forgotten it all. In the description of a dinner in the Sketches we read that

He met Meyerbeer on one occasion at Lord John Russell's. The musician congratulated him on his outspoken language on Sunday observance, a subject in which Dickens was deeply interested, and on which he advocated his views at length in the papers entitled Sunday under Three Heads.

Dickens was acquainted with Jenny Lind, and he gives the following amusing story in a letter to Douglas Jerrold, dated Paris, February 14, 1847:

I am somehow reminded of a good story I heard the other night from a man who was a witness of it and an actor in it....