'Charge It' Keeping Up With Harry 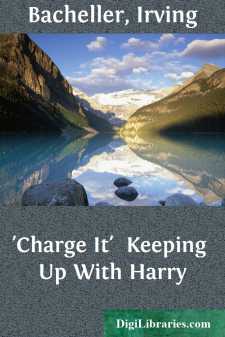 “Harry and I were waiting for his motor-car,” said the Honorable Socrates Potter. “He couldn’t stand and wait––that would be losing time––so we kept busy. Went into the stores and bought things––violets, candy, golf-balls, tennis-shoes, new gloves, and neckties. Harry didn’t need ’em, but he couldn’t waste any time and––

“In each store Harry had used the magic words, ‘Charge it,’ and passed on.

“We were going over to Chesterville to settle with the contractor who had built his father’s house. We had an hour and four minutes in which to do it all, and then––the 6.03 express for New York. Harry had to get it to be in time for a bridge party.

“We climbed in. Harry grabbed the wheel. The gas-lever purred, the gears clicked, the car jumped into motion and rushed, screeching, up the hill ahead of us, shot between a trolley-car and a wagon, swung around a noisy runabout, scared a team into the siding, and sped away.

“The town behind us! Country-houses on either side! A bulldog in the near perspective! He set himself, made a rush at us, as if trying to grab a wheel off the car, and the wheel got him. We flushed a lot of chickens. The air seemed to be full of them. Harry waved an apology to the farmer, as if to say:

“‘He struck a fowl, and, turning, I saw a whirl of feathers in the air behind us and the farmer’s fist waving above the dust.

“Harry would have paid for the dog and the fowl in money but not in time––not even in a second of time! Harry had an engagement for a bridge party and must catch the 6.03 express.

“A man on a bicycle followed by a big greyhound was just ahead. We screeched. The man went into the ditch and took a header. The greyhound didn’t have time to turn out then. He bent to the oars until he had gained lead enough to save himself with a sidelong jump into the buttercups.

“The needle on the speedometer wavered from fifty to fifty-five, then struck at sixty, held a second there, and passed it. Gnats and flies hit my face and stung like flying shot. The top of the road went up in a swirl of dust behind us. I hung on, with my life in my trembling hands. We zipped past teams and motor-cars.

“We filled every eye with dust and every ear with screeches and every heart with a swift pang of terror.

“A rider with a frightened horse raced on ahead of us to the next corner. We sped across the track into Chesterville and––

“‘Hold up! There’s the office ahead.’

“The levers move, down goes the brake, and we’re there.

“‘Eleven miles in fourteen minutes!’ Harry exclaims, as I spring out and hurry to the door. It was really sixteen minutes, but I always allow Harry a slight discount.

“‘At the Wilton job on the point.’

“Away he rushes––I thank God for the brief respite....