Charge! A Story of Briton and Boer 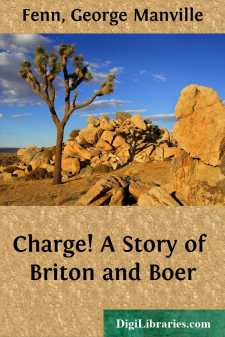 “What’s the matter?” I said excitedly, for my brother Bob came tearing down to the enclosure, sending the long-legged young ostriches scampering away towards the other side; and I knew directly that something unusual must be on the way, or, after the warnings he had received about not startling the wild young coveys, he would not have dashed up like that.

“I dunno. Father sent me to fetch you while he got the guns ready. He said something about mounted men on the other side of the kopje, so it can’t be Kaffirs. I say, do back me up, Val, and get father to let me have a gun.”

“Ugh! you bloodthirsty young wretch!” I cried as I started with him for our place, now partly hidden by the orchard—apple and pear trees—I had helped to plant seven years before, when father really pitched his tent by the kopje, and he, Bob—a little, round-headed tot of a fellow then—Aunt Jenny, and I lived in the canvas construction till we had built a house of stone.

The orchard was planted long before the tent was given up—all trees that father had ordered to be sent to us from a famous nursery in Hertfordshire. How well I remember it all!—the arrival of the four big bundles wrapped in matting, and tied behind a great Cape wagon drawn by twenty oxen, whose foreloper was a big, shiny black fellow, who wore a tremendous straw hat, and seemed to think that was all he needed in the way of clothes, as it was big enough to keep off the sun (of which there was a great deal) and the rain (of which there was little). In fact, he wore scarcely anything else—only part of a very old pair of canvas trousers, which he made comfortable and according to his taste by cutting down at the top, so as to get rid of the waist, and tearing close in the fork till the legs were about three inches long.

I remember it all so well: seeing the foreloper come striding along by the foremost pair of oxen, holding one of them by its horn, and carrying a long, thin pole like a very big fishing-rod over his shoulder, for use instead of a whip to guide the oxen. Yes, I recollect it as if it were only yesterday. I looked at him, and he looked at me. My eyes were fixed upon those trousers; and I burst out, boy-like, into the heartiest fit of laughter I ever had. As I laughed his eyes opened wider and wider, and the corners of his mouth began to creep back farther and farther till they nearly disappeared. Then, suddenly, his mouth flew open, showing a wonderfully white set of teeth, and he gave vent to “Yer-her! Yawk, yawk, yawk, yawk! Yor-hor!” Then he helped to outspan the oxen, and I showed him and the man with the wagon where to find water. At every order I gave he opened his mouth and laughed at me; but he eagerly did all I bade, and followed me back to the wagon to help in unloading the bundles of trees, taking the greatest interest in everything, and lifting the boxes and packages of stores which had come with the trees, no matter what their weight, as if he enjoyed putting forth his tremendous strength....