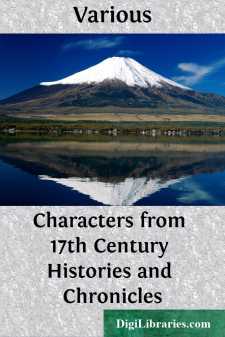 The art of literary portraiture in the seventeenth century developed with the effort to improve the writing of history. Its first and at all times its chief purpose in England was to show to later ages what kind of men had directed the affairs and shaped the fortunes of the nation. In France it was to be practised as a mere pastime; to sketch well-known figures in society, or to sketch oneself, was for some years the fashionable occupation of the salons. In England the character never wholly lost the qualities of its origin. It might be used on occasion as a record of affection, or as a weapon of political satire; but our chief character writers are our historians. At the beginning of the seventeenth century England was recognized to be deficient in historical writings. Poetry looked back to Chaucer as its father, was proud of its long tradition, and had proved its right to sing the glories of Elizabeth's reign. The drama, in the full vigour of its youth, challenged comparison with the drama of Greece and Rome. Prose was conscious of its power in exposition and controversy. But in every review of our literature's great achievement and greater promise there was one cause of serious misgivings. England could not yet rank with other countries in its histories. Many large volumes had been printed, some of them containing matter that is invaluable to the modern student, but there was no single work that was thought to be worthy of England's greatness. The prevailing type was still the chronicle. Even Camden, 'the glory and light of the kingdom', as Ben Jonson called him, was an antiquary, a collector, and an annalist. History had yet to be practised as one of the great literary arts.

Bacon pointed out the 'unworthiness' and 'deficiences' of English history in his Advancement of Learning.[1] 'Some few very worthy, but the greater part beneath mediocrity' was his verdict on modern histories in general. He was not the first to express these views. Sir Henry Savile had been more emphatic in his dedication to Queen Elizabeth of his collection of early chronicles, Rerum Anglicarum Scriptores post Bedam, published in 1596.[2] And after Bacon, somewhere about 1618, these views were again expressed by Edmund Bolton in his Hypercritica, or a Rule of Judgement for writing or reading our Histories.[3] 'The vast vulgar Tomes', he said, 'procured for the most part by the husbandry of Printers, and not by appointment of the Prince or Authority of the Common-weal, in their tumultuary and centonical Writings do seem to resemble some huge disproportionable Temple, whose Architect was not his Arts Master'. He repeated what he calls the common wish 'that the majesty of handling our history might once equal the majesty of the argument'. England had had all other honours, but only wanted a history.

But the most valuable statement on the conditions of English history at this time and the obstacles that hindered its progress was made by Sir John Hayward at the beginning of his Lives of the III Normans, Kings of England, published in 1613....