Ceylon; an Account of the Island Physical, Historical, and Topographical with Notices of Its Natural History, Antiquities and Productions, Volume 1 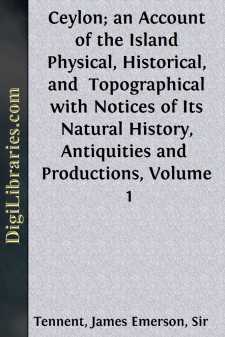 There is no island in the world, Great Britain itself not excepted, that has attracted the attention of authors in so many distant ages and so many different countries as Ceylon. There is no nation in ancient or modern times possessed of a language and a literature, the writers of which have not at some time made it their theme. Its aspect, its religion, its antiquities, and productions, have been described as well by the classic Greeks, as by those of the Lower Empire; by the Romans; by the writers of China, Burmah, India, and Kashmir; by the geographers of Arabia and Persia; by the mediæval voyagers of Italy and France; by the annalists of Portugal and Spain; by the merchant adventurers of Holland, and by the travellers and topographers of Great Britain.

But amidst this wealth of materials as to the island, and its vicissitudes in early times, there is an absolute dearth of information regarding its state and progress during more recent periods, and its actual condition at the present day.

I was made sensible of this want, on the occasion of my nomination, in 1845, to an office in connection with the government of Ceylon. I found abundant details as to the capture of the maritime provinces from the Dutch in 1795, in the narrative of Captain PERCIVAL[1], an officer who had served in the expedition; and the efforts to organise the first system of administration are amply described by CORDINER[2], Chaplain to the Forces; by Lord VALENTIA[3], who was then travelling in the East; and by ANTHONY BERTOLACCI[4], who acted as auditor-general to the first governor, Mr. North, afterwards Earl of Guilford. The story of the capture of Kandy in 1815 has been related by an anonymous eye-witness under the pseudonyme of PHILALETHES[5], and by MARSHALL in his Historical Sketch of the conquest.[6] An admirable description of the interior of the island, as it presented itself some forty years ago, was furnished by Dr. DAVY[7], a brother of the eminent philosopher, who was employed on the medical staff in Ceylon, from 1816 till 1820.

4: A View of the Agricultural, Commercial, and Financial Interests of Ceylon, &c., by A. BERTOLACCI, Esq. London, 1817.

5: A History of Ceylon from the earliest Period to the Year MDCCCXV, by PHILALETHES, A.M. 4to. Lond. 1817. The author is believed to have been the Rev. G. Bisset.

Here the long series of writers is broken, just at the commencement of a period the most important and interesting in the history of the island....