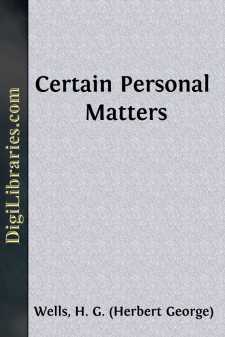 CERTAIN PERSONAL MATTERS THOUGHTS ON CHEAPNESS AND MY AUNT CHARLOTTE

The world mends. In my younger days people believed in mahogany; some of my readers will remember it—a heavy, shining substance, having a singularly close resemblance to raw liver, exceedingly heavy to move, and esteemed on one or other count the noblest of all woods. Such of us as were very poor and had no mahogany pretended to have mahogany; and the proper hepatite tint was got by veneering. That makes one incline to think it was the colour that pleased people. In those days there was a word "trashy," now almost lost to the world. My dear Aunt Charlotte used that epithet when, in her feminine way, she swore at people she did not like. "Trashy" and "paltry" and "Brummagem" was the very worst she could say of them. And she had, I remember, an intense aversion to plated goods and bronze halfpence. The halfpence of her youth had been vast and corpulent red-brown discs, which it was folly to speak of as small change. They were fine handsome coins, and almost as inconvenient as crown-pieces. I remember she corrected me once when I was very young. "Don't call a penny a copper, dear," she said; "copper is a metal. The pennies they have nowadays are bronze." It is odd how our childish impressions cling to us. I still regard bronze as a kind of upstart intruder, a mere trashy pretender among metals.

All my Aunt Charlotte's furniture was thoroughly good, and most of it extremely uncomfortable; there was not a thing for a little boy to break and escape damnation in the household. Her china was the only thing with a touch of beauty in it—at least I remember nothing else—and each of her blessed plates was worth the happiness of a mortal for days together. And they dressed me in a Nessus suit of valuable garments. I learned the value of thoroughly good things only too early. I knew the equivalent of a teacup to the very last scowl, and I have hated good, handsome property ever since. For my part I love cheap things, trashy things, things made of the commonest rubbish that money can possibly buy; things as vulgar as primroses, and as transitory as a morning's frost.

Think of all the advantages of a cheap possession—cheap and nasty, if you will—compared with some valuable substitute. Suppose you need this or that. "Get a good one," advises Aunt Charlotte; "one that will last." You do—and it does last. It lasts like a family curse. These great plain valuable things, as plain as good women, as complacently assured of their intrinsic worth—who does not know them? My Aunt Charlotte scarcely had a new thing in her life. Her mahogany was avuncular; her china remotely ancestral; her feather beds and her bedsteads!—they were haunted; the births, marriages, and deaths associated with the best one was the history of our race for three generations. There was more in her house than the tombstone rectitude of the chair-backs to remind me of the graveyard. I can still remember the sombre aisles of that house, the vault-like shadows, the magnificent window curtains that blotted out the windows....