Cerberus, The Dog of Hades The History of an Idea 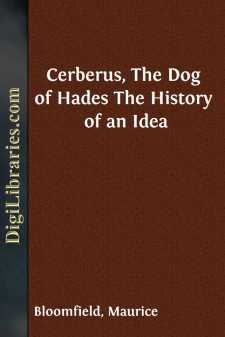 CERBERUS, THE DOG OF HADES

Hermes, the guide of the dead, brings to Pluto's kingdom their psyches, "that gibber like bats, as they fare down the dank ways, past the streams of Okeanos, past the gates of the sun and the land of dreams, to the meadow of asphodel in the dark realm of Hades, where dwell the souls, the phantoms of men outworn." So begins the twenty-fourth book of the Odyssey. Later poets have Charon, a grim boatsman, receive the dead at the River of Woe; he ferries them across, provided the passage money has been placed in their mouths, and their bodies have been duly buried in the world above. Otherwise they are left to gibber on the hither bank. Pluto's house, wide-gated, thronged with guests, has a janitor Kerberos, sometimes friendly, sometimes snarling when new guests arrive, but always hostile to those who would depart. Honey cakes are provided for them that are about to go to Hades—the sop to Cerberus. This dog, nameless and undescribed, Homer mentions simply as the dog of Hades, whom Herakles, as the last and chief test of his strength, snatched from the horrible house of Hades. First Hesiod and next Stesichorus discover his name to be Kerberos. The latter seems to have composed a poem on the dog. Hesiod mentions not only the name but also the genealogy of Kerberos. Of Typhaon and Echidna he was born, the irresistible and ineffable flesh-devourer, the voracious, brazen-voiced, fifty-headed dog of hell.

Plato in the Republic refers to the composite nature of Kerberos. Not until Apollodorus (2. 5. 12. 1. ff.), in the second century B. C., comes the familiar description: Kerberos now has three dog heads, a dragon tail, and his back is covered with the heads of serpents. But his plural heads must have been familiarly assumed by the Greeks; this will appear from the evidence of their sculptures and vase-paintings.

Classic art has taken up Cerberus very generously; his treatment, however, is far from being as definite as that of the Greek and Roman poets. Statues, sarcophagi, and vase paintings whose theme is Hades, or scenes laid in Hades, represent him as a ferocious Greek collie, often encircled with serpents, and with a serpent for a tail, but there is no certainty as to the number of his heads. Often he is three-headed in art as in literature, as may be seen conveniently in the reproductions in Baumeister's Denkmäler des Klassischen Altertums. Very familiar is the statue in the villa Borghese of Pluto enthroned, three-headed Cerberus by his side. A Greek scarabæus shows a pair of lovers, or a married couple, who have died at the same time, crossing in Charon's ferry. As they are approaching the other bank of the Styx, where a three-headed Cerberus is awaiting them, the girl seems afright and is upheld by her male companion. On the other hand, a bronze in Naples shows the smiling boy Herakles engaged in strangling two serpents, one with each hand. The figure rests on a cylindrical base upon which are depicted eight of the wonderful deeds which Herakles performs later on....