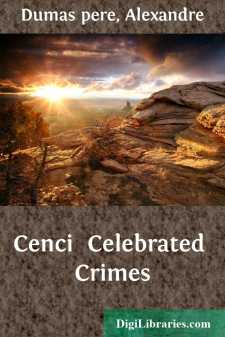 Should you ever go to Rome and visit the villa Pamphili, no doubt, after having sought under its tall pines and along its canals the shade and freshness so rare in the capital of the Christian world, you will descend towards the Janiculum Hill by a charming road, in the middle of which you will find the Pauline fountain. Having passed this monument, and having lingered a moment on the terrace of the church of St. Peter Montorio, which commands the whole of Rome, you will visit the cloister of Bramante, in the middle of which, sunk a few feet below the level, is built, on the identical place where St. Peter was crucified, a little temple, half Greek, half Christian; you will thence ascend by a side door into the church itself. There, the attentive cicerone will show you, in the first chapel to the right, the Christ Scourged, by Sebastian del Piombo, and in the third chapel to the left, an Entombment by Fiammingo; having examined these two masterpieces at leisure, he will take you to each end of the transverse cross, and will show you—on one side a picture by Salviati, on slate, and on the other a work by Vasari; then, pointing out in melancholy tones a copy of Guido's Martyrdom of St. Peter on the high altar, he will relate to you how for three centuries the divine Raffaelle's Transfiguration was worshipped in that spot; how it was carried away by the French in 1809, and restored to the pope by the Allies in 1814. As you have already in all probability admired this masterpiece in the Vatican, allow him to expatiate, and search at the foot of the altar for a mortuary slab, which you will identify by a cross and the single word, Orate; under this gravestone is buried Beatrice Cenci, whose tragical story cannot but impress you profoundly.

She was the daughter of Francesco Cenci. Whether or not it be true that men are born in harmony with their epoch, and that some embody its good qualities and others its bad ones, it may nevertheless interest our readers to cast a rapid glance over the period which had just passed when the events which we are about to relate took place. Francesco Cenci will then appear to them as the diabolical incarnation of his time.

On the 11th of August, 1492, after the lingering death-agony of Innocent VIII, during which two hundred and twenty murders were committed in the streets of Rome, Alexander VI ascended the pontifical throne. Son of a sister of Pope Calixtus III, Roderigo Lenzuoli Borgia, before being created cardinal, had five children by Rosa Vanozza, whom he afterwards caused to be married to a rich Roman. These children were:

Lucrezia, who was married four times: her first husband was Giovanni Sforza, lord of Pesaro, whom she left owing to his impotence; the second, Alfonso, Duke of Bisiglia, whom her brother Caesar caused to be assassinated; the third, Alfonso d'Este, Duke of Ferrara, from whom a second divorce separated her; finally, the fourth, Alfonso of Aragon, who was stabbed to death on the steps of the basilica of St. Peter, and afterwards, three weeks later, strangled, because he did not die soon enough from his wounds, which nevertheless were mortal; Giofre, Count of Squillace, of whom little is known; and, finally, a youngest son, of whom nothing at all is known.

The most famous of these three brothers was Caesar Borgia. He had made every arrangement a plotter could make to be King of Italy at the death of his father the pope, and his measures were so carefully taken as to leave no doubt in his own mind as to the success of this vast project. Every chance was provided against, except one; but Satan himself could hardly have foreseen this particular one. The reader will judge for himself.

The pope had invited Cardinal Adrien to supper in his vineyard on the Belvidere; Cardinal Adrien was very rich, and the pope wished to inherit his wealth, as he already had acquired that of the Cardinals of Sant' Angelo, Capua, and Modena. To effect this, Caesar Borgia sent two bottles of poisoned wine to his father's cup-bearer, without taking him into his confidence; he only instructed him not to serve this wine till he himself gave orders to do so; unfortunately, during supper the cup-bearer left his post for a moment, and in this interval a careless butler served the poisoned wine to the pope, to Caesar Borgia, and to Cardinal Corneto.

Alexander VI died some hours afterwards; Caesar Borgia was confined to bed, and sloughed off his skin; while Cardinal Corneto lost his sight and his senses, and was brought to death's door.

Pius III succeeded Alexander VI, and reigned twenty-five days; on the twenty-sixth he was poisoned also.

Caesar Borgia had under his control eighteen Spanish cardinals who owed to him their places in the Sacred College; these cardinals were entirely his creatures, and he could command them absolutely....