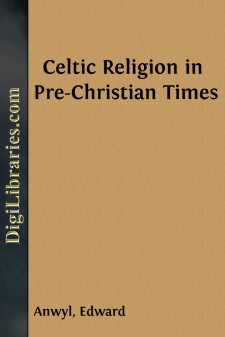 In dealing with the subject of ‘Celtic Religion’ the first duty of the writer is to explain the sense in which the term ‘Celtic’ will be used in this work.  It will be used in reference to those countries and districts which, in historic times, have been at one time or other mainly of Celtic speech.  It does not follow that all the races which spoke a form of the Celtic tongue, a tongue of the Indo-European family, were all of the same stock.  Indeed, ethnological and archæological evidence tends to establish clearly that, in Gaul and Britain, for example, man had lived for ages before the introduction of any variety of Aryan or Indo-European speech, and this was probably the case throughout the whole of Western and Southern Europe.  Further, in the light of comparative philology, it has now become abundantly clear that the forms of Indo-European speech which we call Celtic are most closely related to those of the Italic family, of which family Latin is the best known representative.  From this it follows that we are to look for the centre of dissemination of Aryan Celtic speech in some district of Europe that could have been the natural centre of dissemination also for the Italic languages.  From this common centre, through conquest and the commercial intercourse which followed it, the tribes which spoke the various forms of Celtic and Italic speech spread into the districts occupied by them in historic times.  The common centre of radiation for Celtic and Italic speech was probably in the districts of Noricum and Pannonia, the modern Carniola, Carinthia, etc., and the neighbouring parts of the Danube valley.  The conquering Aryan-speaking Celts and Italians formed a military aristocracy, and their success in extending the range of their languages was largely due to their skill in arms, combined, in all probability, with a talent for administration.  This military aristocracy was of kindred type to that which carried Aryan speech into India and Persia, Armenia and Greece, not to speak of the original speakers of the Teutonic and Slavonic tongues.  In view of the necessity of discovering a centre, whence the Indo-European or Aryan languages in general could have radiated Eastwards, as well as Westwards, the tendency to-day is to regard these tongues as having been spoken originally in some district between the Carpathians and the Steppes, in the form of kindred dialects of a common speech.  Some branches of the tribes which spoke these dialects penetrated into Central Europe, doubtless along the Danube, and, from the Danube valley, extended their conquests together with their various forms of Aryan speech into Southern and Western Europe.  The proportion of conquerors to conquered was not uniform in all the countries where they held sway, so that the amount of Aryan blood in their resultant population varied greatly.  In most cases, the families of the original conquerors, by their skill in the art of war and a certain instinct of government, succeeded in making their own tongues the dominant media of communication in the lands where they ruled, with the result that most of the languages of Europe to-day are of the Aryan or Indo-European type.  It does not, however, follow necessarily from this that the early religious ideas or the artistic civilisation of countries now Aryan in speech, came necessarily from the conquerors rather than the conquered.  In the last century it was long held that in countries of Aryan speech the essential features of their civilisation, their religious ideas, their social institutions, nay, more, their inhabitants themselves, were of Aryan origin.

A more critical investigation has, however, enabled us to distinguish clearly between the development of various factors of human life which in their evolution can follow and often have followed more or less independent lines.  The physical history of race, for instance, forms a problem by itself and must be studied by anthropological and ethnological methods.  Language, again, has often spread along lines other than those of race, and its investigation appertains to the sphere of the philologist.  Material civilisation, too, has not of necessity followed the lines either of racial or of linguistic development, and the search for its ancient trade-routes may be safely left to the archæologist.  Similarly the spread of ideas in religion and thought is one which has advanced on lines of its own, and its investigation must be conducted by the methods and along the lines of the comparative study of religions....