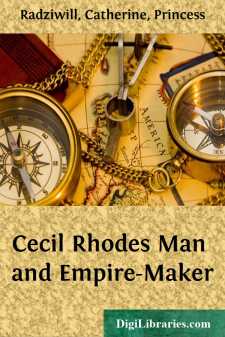 The conquest of South Africa is one of the most curious episodes in English history. Begun through purely mercenary motives, it yet acquired a character of grandeur which, as time went on, divested it of all sordid and unworthy suspicions. South Africa has certainly been the land of adventurers, and many of them found there either fame or disgrace, unheard-of riches or the most abject poverty, power or humiliation. At the same time the Colony has had amongst its rulers statesmen of unblemished reputation and high honour, administrators of rare integrity, and men who saw beyond the fleeting interests of the hour into the far more important vista of the future.

When President Kruger was at its head the Transvaal Republic would have crumbled under the intrigues of some of its own citizens. The lust for riches which followed upon the discovery of the goldfields had, too, a drastic effect. The Transvaal was bound to fall into the hands of someone, and to be that Someone fell to the lot of England. This was a kindly throw of Fate, because England alone could administer all the wealth of the region without its becoming a danger, not only to the community at large, but also to the Transvaalers.

That this is so can be proved by the eloquence of facts rather than by words. It is sufficient to look upon what South Africa was twenty-five years ago, and upon what it has become since under the protection of British rule, to be convinced of the truth of my assertion. From a land of perennial unrest and perpetual strife it has been transformed into a prosperous and quiet colony, absorbed only in the thought of its economic and commercial progress. Its population, which twenty years ago was wasting its time and energy in useless wrangles, stands to-day united to the Mother Country and absorbed by the sole thought of how best to prove its devotion.

The Boer War has still some curious issues of which no notice has been taken by the public at large. One of the principal, perhaps indeed the most important of these, is that, though brought about by material ambitions of certain people, it ended by being fought against these very same people, and that its conclusion eliminated them from public life instead of adding to their influence and their power. The result is certainly a strange and an interesting one, but it is easily explained if one takes into account the fact that once England as a nation—and not as the nation to which belonged the handful of adventurers through whose intrigues the war was brought about—entered into the possession of the Transvaal and organised the long-talked-of Union of South Africa, the country started a normal existence free from the unhealthy symptoms which had hindered its progress. It became a useful member of the vast British Empire, as well as a prosperous country enjoying a good government, and launched itself upon a career it could never have entered upon but for the war. Destructive as it was, the Boer campaign was not a war of annihilation....