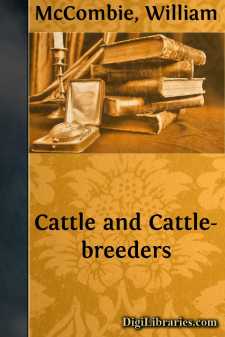 I. THE FEEDING OF CATTLE, Etc.

(Read before the Chamber of Agriculture.)

As my friend Mr Stevenson and some other members of the Chamber of Agriculture have expressed a desire that I should read a paper on my experience as a feeder of cattle, I have, with some hesitation, put together a few notes of my experience. I trust the Chamber will overlook the somewhat egotistical form into which I have been led in referring to the subject of dealing in cattle.

My father and my grandfather were dealers in cattle. The former carried on a very extensive business: he had dealings with several of the most eminent feeders in East Lothian; among others, with the late Adam Bogue, Linplum, John Rennie of Phantassie, Mr Walker, Ferrygate, &c. I cannot express how much I reverence the memory of the late Adam Bogue, as one of the finest specimens of a kind-hearted gentleman I have ever met. Other friends of my father and of myself in East Lothian I also recall with the greatest respect; among these let me mention William Brodie, John Brodie, William Kerr, John Slate, Archibald Skirving, and Mr Broadwood, farmers, all eminent as feeders of stock. My father's chief business-connection was with East Lothian; but he had also a connection with Mid-Lothian and the county of Fife, and a large trade with England. At one of the Michaelmas Trysts of Falkirk he sold 1500 cattle. He wished to give all the members of his family a good education. I was kept at school, and was afterwards two years at college; but to this day I regret my inattention when at school.

My father was very unwilling that I should follow his business, knowing that it was a very precarious one; but what could he do with me? I would do nothing else, and he was obliged to yield. I worked on the farm for years, when not away at the fairs, with the servants, and shared their diet. I cut two harvests, and during the season took charge of the cattle. My first speculation was a £12 grass-field. In this I had a partner, an excellent man, who had been a servant to my father for twenty years. It was a good year, and we divided £15 of profit. This gave me encouragement. I yearly increased my speculations, and gradually got into my father's business at the Falkirk markets and Hallow Fair. My father was very indulgent, and sent me away to a fair when a very young man, giving me authority to buy, and money to pay for, half-a-dozen beasts. I exceeded my commission and bought three little lots—about fifteen in all. The owners trusted me the money I was short. I drove them home myself—about sixteen miles—feeling very proud of my drove. My father examined them next morning, and remarked, "They have not the countenance of beasts." Of course, this chagrined me very much. This was about my first appearance as a buyer of cattle, and some of the beasts I remember to this day. I believe there is no better way to train a young man than to put him to market without assistance. If a man cannot back himself, he is unfit for the trade of a butcher, a jobber, or grazier....