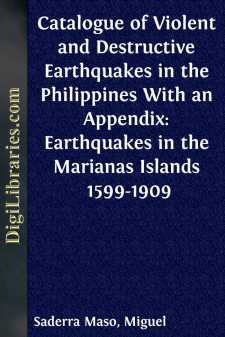 Introduction.—The occasion for publishing this catalogue of Philippine earthquakes which were of violent and destructive character has been furnished by a request from Prof. John Milne for a list of such phenomena, to be included in the General Earthquake Catalogue which this eminent seismologist is preparing under the auspices of the British Association for the Advancement of Science. The said general catalogue has been undertaken with a view toward reducing to uniformity and completing those published years ago by Robert Mallet (1859) and Perrey (1844-1871). The form adopted for Professor Milne's new catalogue is very concise, comprising only the date, intensity, and region together with principal localities affected. It will contain only the earthquakes of intensities VII to X according to the scale of De Rossi-Forel, and these will be divided into three classes: Class I will be formed by the earthquakes of sufficient force to produce cracks in buildings and to throw down chimneys; they correspond to force VII of De Rossi-Forel. Class II consists of the earthquakes which not only threw down chimneys but also walls and some weak structures; force VIII of De Rossi-Forel. Class III comprises the earthquakes which caused general destruction; force IX and X of De Rossi-Forel. As this classification is as purely conventional as every other and adopted only in the catalogue mentioned, we do not employ it in the present catalogue of Philippine earthquakes, but retain the almost universally adopted scale of De Rossi-Forel. We shall also present more details as to the towns and buildings damaged, the number of victims and other disastrous effects than enter into the catalogue of Professor Milne.

Hence, the differences between the list prepared for Professor Milne as well as the partial catalogue published in our Monthly Bulletin for February of the present year consist in the following: (1) This catalogue contains also several earthquakes whose intensities were between VI and VII, while in the former only such figure as according to their effects were decidedly of force VII. (2) The new catalogue is more complete as to details concerning the towns, etc., which have been destroyed.

It is to be regretted that we are unable to present here a complete historical catalogue of all the destruction wrought in the Archipelago by earthquakes since the time when Legaspi and Urdaneta first set foot on these shores. But the old chroniclers, who dwell upon the political happenings with an attention to detail which is occasionally overdone, were invariably laconic when there was question of earthquakes and similar natural phenomena; as a rule they were satisfied with mentioning the occurrence in a general and therefore vague way, without any attempt at precision as to dates and places. Still the writers in the Philippines did nothing worse than imitate their colleagues throughout the rest of the world. This fact is responsible for the great contrast exhibited by our catalogue as regards the number and details of earthquakes which occurred prior to 1800, records of which have been preserved, and the same data for the period from 1800 to the present time....