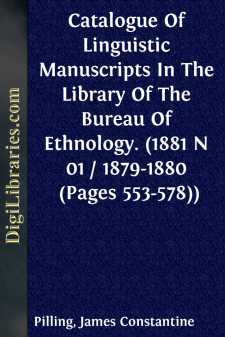 CATALOGUE OF LINGUISTIC MANUSCRIPTS IN THE LIBRARYOF THE BUREAU OF ETHNOLOGY.

Mr. Henry R. Schoolcraft, while engaged in the preparation of his work—"Information respecting the History, Condition, and Prospects of the Indian Tribes of the United States"—sent to various persons residing among the Indians a "Comparative Vocabulary of the Languages of the Indian Tribes of the United States," a quarto paper of 25 pages, comprising 350 words, and the numerals one to one billion. The returns from this were for the most part incorporated in his work; a few, however, found their way into the collection of the Smithsonian Institution.

In 1853-'54, Mr. George Gibbs, while engaged under Gov. Isaac I. Stevens in "Explorations for a route for the Pacific Railroad near the 47th and 49th parallels of north latitude," became interested in the study of the languages of the Indians inhabiting the Northwest, and collected many vocabularies. To further extend this work, he prepared and had printed a folio paper of three leaves entitled "A vocabulary of 180 words which it is desired to collect in the different languages and dialects throughout the Pacific Coast for publication by the Smithsonian Institute at Washington."

These were sent to such persons as, in his judgment, were competent to furnish the material desired, and many of them, filled or partly filled, were returned to him. A second edition of this vocabulary, 6 ll., folio, was issued.

In 1863 there was published by the Smithsonian Institution a pamphlet with the following title:

In his introductory remarks, Professor Henry thus states the object of the paper:

"The Smithsonian Institution is desirous of extending and completing its collections of facts and materials relative to the Ethnology, Archæology, and Philology of the races of mankind inhabiting, either now or at any previous period, the continent of America, and earnestly solicits the coöperation in this object of all officers of the United States Government, and travellers or residents who may have it in their power to render any assistance."

Under the head of Philology, Mr. Gibbs gave a brief account of some of the peculiarities of Indian languages, with general directions for the best method of collecting certain words; a simple and practical alphabet; and a vocabulary in English, Spanish, French, and Latin of 211 words. Speaking of the latter, he says:

"In view of the importance of a uniform system in collecting words of the various Indian languages of North America, adapted to the use of officers of the government, travellers, and others, the following is recommended as a Standard Vocabulary. It is mainly the one prepared by the late Hon. Albert Gallatin, with a few changes made by Mr. Hale, the Ethnologist of the United States Exploring Expedition, and is adopted as that upon which nearly all the collections hitherto made for the purpose of comparison have been based....