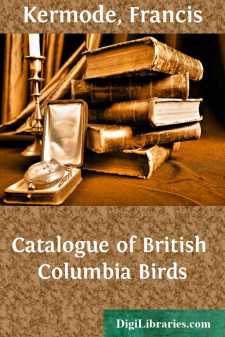 The present list is intended to include all birds which have been so far proven to occur in British Columbia.

I am fully aware of its incompleteness, and very much regret much of its lack of more definite information regarding the distribution of certain species, and with regard to that portion of the Province in north and northeastern interior, which, I have no doubt, is a valuable field for work.

Since the publication of the list of British Columbia birds in 1898 by the late John Fannin, which contained 339 species and sub-species, and with the information to hand, enables me to add to this 24.

I have also obtained valuable information from the check-list published by the late John Fannin.

A common winter resident along the coast of Vancouver Island andMainland. Mr. Brooks says a few remain all winter at Okanagan Lake.

A common winter resident along the coast of Vancouver Island andMainland. Winter resident on Okanagan Lake. (Brooks.) Not common atMetlakatla. (Rev. J. H. Keen.) Breeds on many of the lakes along theCariboo Road above Clinton. (Fannin.)

A common winter resident on the coast, and very common in the straitsnear Victoria, in April. Brooks reports it at Okanagan Lake all winter.Breeds on the lakes from Okanagan to Dense Lake. (Fannin.) Rare atMetlakatla. (Rev. J. H. Keen.)

Common resident throughout the Province; breeds on Vancouver Island and Mainland.

Not common; one specimen taken at Comox by W. B. Anderson, and atChilliwhack by Brooks; Victoria, May 13th, 1904, by Fred. Foster.

I found this species quite common on Barkley Sound, V. I., April 19th, 1894, and fairly common near Esquimalt. Mr. Brooks reports it at Chilliwhack....