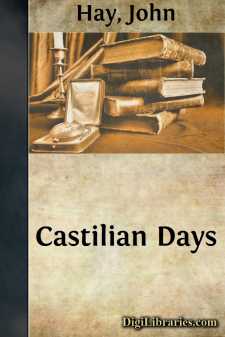 Madrid is a capital with malice aforethought. Usually the seat of government is established in some important town from the force of circumstances. Some cities have an attraction too powerful for the court to resist. There is no capital of England possible but London. Paris is the heart of France. Rome is the predestined capital of Italy in spite of the wandering flirtations its varying governments in different centuries have carried on with Ravenna, or Naples, or Florence. You can imagine no Residenz for Austria but the Kaiserstadt,—the gemuthlich Wien. But there are other capitals where men have arranged things and consequently bungled them. The great Czar Peter slapped his imperial court down on the marshy shore of the Neva, where he could look westward into civilization and watch with the jealous eye of an intelligent barbarian the doings of his betters. Washington is another specimen of the cold-blooded handiwork of the capital builders. We shall think nothing less of the clarum et venerabile nomen of its founder if we admit he was human, and his wishing the seat of government nearer to Mount Vernon than Mount Washington sufficiently proves this. But Madrid more plainly than any other capital shows the traces of having been set down and properly brought up by the strong hand of a paternal government; and like children with whom the same regimen has been followed, it presents in its maturity a curious mixture of lawlessness and insipidity.

Its greatness was thrust upon it by Philip II. Some premonitory symptoms of the dangerous honor that awaited it had been seen in preceding reigns. Ferdinand and Isabella occasionally set up their pilgrim tabernacle on the declivity that overhangs the Manzanares. Charles V. found the thin, fine air comforting to his gouty articulations. But Philip II. made it his court. It seems hard to conceive how a king who had his choice of Lisbon, with its glorious harbor and unequalled communications; Seville, with its delicious climate and natural beauty; and Salamanca and Toledo, with their wealth of tradition, splendor of architecture, and renown of learning, should have chosen this barren mountain for his home, and the seat of his empire. But when we know this monkish king we wonder no longer. He chose Madrid simply because it was cheerless and bare and of ophthalmic ugliness. The royal kill-joy delighted in having the dreariest capital on earth. After a while there seemed to him too much life and humanity about Madrid, and he built the Escorial, the grandest ideal of majesty and ennui that the world has ever seen. This vast mass of granite has somehow acted as an anchor that has held the capital fast moored at Madrid through all succeeding years.

It was a dreary and somewhat shabby court for many reigns. The great kings who started the Austrian dynasty were too busy in their world conquest to pay much attention to beautifying Madrid, and their weak successors, sunk in ignoble pleasures, had not energy enough to indulge the royal folly of building....