Cast Upon the Breakers 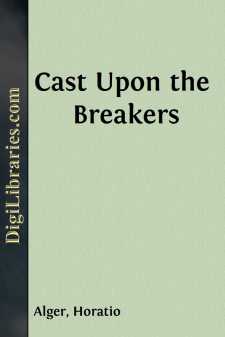 CHAPTER I. A FAITHLESS GUARDIAN.

"Well, good by, Rodney! I leave school tomorrow. I am going to learn a trade."

"I am sorry to part with you, David. Couldn't you stay another term?"

"No: my uncle says I must be earning my living, and I have a chance to learn the carpenter's trade."

"Where are you going?"

"To Duffield, some twenty miles away. I wish I were in your shoes. You have no money cares, and can go on quietly and complete your education."

"I don't know how I am situated, David. I only know that my guardian pays my expenses at this boarding school."

"Yes, you are a star boarder, and have the nicest room in the institution. I am only a poor day scholar. Still I feel thankful that I have been allowed to remain as long as I have. Who is your guardian?"

"Do you know how much you will inherit when you come of age?" asked David, after a short pause.

"It seems to me your guardian ought to have told you."

"I scarcely know my guardian. Five years ago I spent a week at his home. I don't remember much about it except that he lives in a handsome house, and has plenty of servants. Since then, as you know, I have passed most of my time here, except that in the summer I was allowed to board at the Catskills or any country place I might select."

"Yes, and I remember one year you took me with you and paid all my expenses. I shall never forget your kindness, and how much I enjoyed that summer."

"My dear David," he said, "it was all selfishness on my part. I knew I should enjoy myself much better with a companion."

"You may call that selfishness, Rodney, but it is a kind of selfishness that makes me your devoted friend. How long do you think you shall remain at school?"

"I don't know. My guardian has never told me his plans for me. I wish he would."

"I shall miss you, Rodney, but we will correspond, won't we?"

"Surely. You know I shall always feel interested in you and your welfare."

David was a plain boy of humble parentage, and would probably be a hard working mechanic. In fact he was looking for nothing better.

But Rodney Ropes looked to be of genteel blood, and had the air of one who had been brought up a gentleman. But different as they were in social position the two boys had always been devoted friends.

The boarding school of which Rodney was, as his friend expressed himself, a star pupil, was situated about fifty miles from the city of New York. It was under the charge of Dr. Sampson, a tall, thin man of fair scholarship, keenly alive to his own interest, who showed partiality for his richer pupils, and whenever he had occasion to censure bore most heavily upon boys like David Hull, who was poor.

Rodney occupied alone the finest room in the school. There was a great contrast between his comfortable quarters and the extremely plain dormitories occupied by less favored pupils.

In the case of some boys the favoritism of the teacher would have led them to put on airs, and made them unpopular with their school fellows....