Cast Away in the Cold An Old Man's Story of a Young Man's Adventures, as Related by Captain John Hardy, Mariner 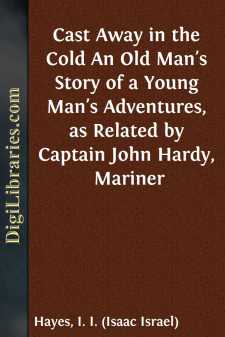 CHAPTER I. Relates how an Ancient Mariner met three Little People and promised them a Little Story.

As soon as the children saw the old man, the eldest recognized him as a friend; and no sooner had his eyes lighted on him than, much excited, he shouted loudly, “Hurrah, there comes the ancient mariner!”

Then the eldest, much elated, asked derisively, “Why, don’t you know?” And then he said, instructively: “He’s been about here for ever so long a time; but he went away last year, and I haven’t seen him for a great while. He’s the most wonderful man you ever saw,—tells such splendid stories,—all about shipwrecks, pirates, savages, Chinamen, bear-hunts, bull-fights, and everything else that you can think of. I call him the ‘Ancient Mariner,’ but that isn’t his right name. He’s Captain Hardy; but he looks like an ancient mariner, as he is, and I got the name out of a book. Some of the fellows call him ‘Old Father Neptune.’”

“What a funny name!” cried Fred.

“What do they call him Father Neptune for?” inquired Alice.

“Because,” answered William, looking very wise,—“because, you know, Neptune, he’s god of the sea, and Captain Hardy looks just like the pictures of him in the story-books. That’s why they call him Old Father Neptune.”

By this time the old man had come quite near, and William, suddenly leaving his companions, dashed ahead to meet him.

“O Captain Hardy, I’m so glad to see you!” exclaimed the little fellow, as he rushed upon him. “Where did you come from? Where have you been so long? How are you? Quite well, I hope,”—and he grasped the old man’s hand with both his own, and shook it heartily.

“Well, my lad,” replied the old man, kindly, “I’m right glad to see you, and will be right glad to answer all your questions, if you’ll let them off easy like, and not all in a broadside”; and as they walked on up the path together, William’s questions were answered to his entire satisfaction....