Carpentry for Boys In a Simple Language, Including Chapters on Drawing, Laying Out Work, Designing and Architecture With 250 Original Illustrations 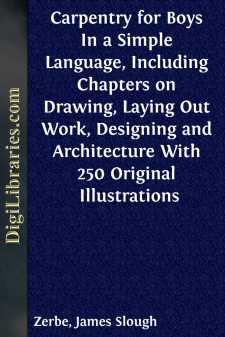 Carpentry is the oldest of the arts, and it has been said that the knowledge necessary to make a good carpenter fits one for almost any trade or occupation requiring the use of tools. The hatchet, the saw, and the plane are the three primal implements of the carpenter. The value is in knowing how to use them.

The institution of Manual Training Schools everywhere is but a tardy recognition of the value of systematic training in the use of tools. There is no branch of industry which needs such diversification, in order to become efficient.

The skill of the blacksmith is centered in his ability to forge, to weld, and to temper; that of the machinist depends upon the callipered dimensions of his product; the painter in his taste for harmony; the mason on his ability to cut the stone accurately; and the plasterer to produce a uniform surface. But the carpenter must, in order to be an expert, combine all these qualifications, in a greater or less degree, and his vocation may justly be called the King of Trades. Rightly, therefore, it should be cultivated in order to learn the essentials of manual training work.

But there is another feature of the utmost importance and value, which is generally overlooked, and on which there is placed too little stress, even in many of the manual training schools. The training of the mind has been systematized so as to bring into operation the energies of all the brain cells. Manual training to be efficient should, at the same time, be directed into such channels as will most widely stimulate the muscular development of the child, while at the same time cultivating his mind.

There is no trade which offers such a useful field as carpentry. It may be said that the various manual operations bring into play every muscle of the body.

The saw, the plane, the hammer, the chisel, each requires its special muscular energy. The carpenter, unlike the blacksmith, does not put all his brawn into his shoulders, nor develop his torso at the expense of his other muscles, like the mason. It may also be said that, unlike most other occupations, the carpenter has both out-of-door and indoor exercise, so that he is at all times able to follow his occupation, summer or winter, rain or shine; and this also further illustrates the value of this branch of endeavor as a healthful recreation.

It is the aim of this book to teach boys the primary requirements—not to generalize—but to show how to prepare and how to do the work; what tools and materials to use; and in what manner the tools used may be made most serviceable, and used most advantageously.

It would be of no value to describe and illustrate how a bracket is made; or how the framework of a structure is provided with mortises and tenons in order to hold it together. The boy must have something as a base which will enable him to design his own creations, and not be an imitator; his mind must develop with his body. It is the principal aim of this book to give the boy something to think about while he is learning how to bring each individual part to perfection.

If the boy understands that there is a principle underlying each structural device; that there is a reason for making certain things a definite way, he is imbued with an incentive which will sooner or later develop into an initiative of his own.

It is this phase in the artisan's life which determines whether he will be merely a machine or an intelligent organism.

This work puts together in a simple, concise form, not only the fundamentals which every mechanic should learn to know, but it defines every structural form used in this art, and illustrates all terms it is necessary to use in the employment of carpentry. A full chapter is devoted to drawings practically applied. All terms are diagrammed and defined, so that the mind may readily grasp the ideas involved.

Finally, it will be observed that every illustration has been specially drawn for this book....