by Carnegie Library of Pittsburgh 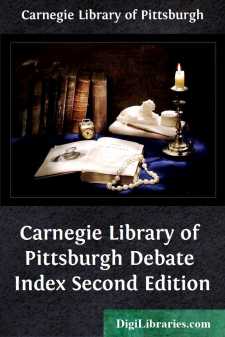 Preface to the Second Edition

This index was begun as a card index to the debaters' manuals in the Reference Department of this Library. The increasing number of such manuals and the frequent requests for material on debates made it seem desirable to combine in one list the indexes to all the manuals, thus bringing references to all the material on one subject together and saving the time required to consult the index of each book. The card index has been so useful here that it has been printed, in the hope that it may also be useful elsewhere. Under each subject are given the proposition for debate, page references to the manuals, and a note indicating the material to be found there, whether briefs, references, specimen debates or synopses of debates.

The "Debates" of this Library, included in the list of books indexed, is a loose-leaf book containing briefs and references copied from various sources or supplementing lists to be found elsewhere. The Carnegie Library "Reference lists" referred to are less complete manuscript lists compiled in response to requests.

One hundred new references have been added in this edition. Twenty-four of these are on new topics and seventy-six are additional references on topics included in the first edition. New cross references have also been included when necessary. The new books indexed are Robbins's "High school debate book," the "Debaters' handbook series" and the new edition of Askew's "Pros and cons," also the numbers of the "Speaker" and of the "Bulletin" of the University of Wisconsin issued in the sixteen months since the first edition of this index was published.