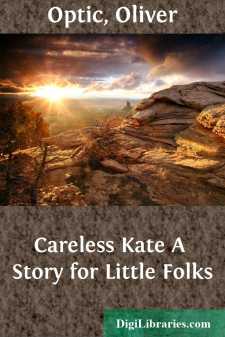 "Kate!" said Mrs. Lamb to her daughter, who was playing in the garden, in front of the house.

"What do you want, mother?" replied the little girl, without even lifting her eyes from the ground, in which she was planting a marigold.

I don't think any of my young readers regard this as a proper answer for a little girl to make to her mother; and I hope none of them ever speak to their parents in this manner.

"Come into the house. I want you," added her mother.

But Kate did not go till she got ready. She was not in the habit of minding her mother at once, and without asking any improper questions as, all good children do, or ought to do, at least.

When she stepped out of the bed of flowers, in which she had been at work, instead of looking to see where she put her feet, she kept her eyes fixed on the place where she had just planted the marigold.

"Look before you leap" is a good motto for everybody—for children, as well as for men and women. If Kate had thought of it, perhaps she would have saved herself and her mother a great deal of trouble.

She did not mind where she stepped, and put her foot upon a beautiful, sweet-scented peony, which had just come out of the ground. She broke the stem short off, and crushed the root all in pieces.

Now, this flower was very highly prized by Mrs. Lamb, for she had brought it from a great distance, and it was the only one of the kind in Riverdale at that time.

Kate was very fond of flowers herself, and when she saw the mischief she had done, she cried with anger and vexation. She would not have spoiled this peony for a great deal, for she had looked forward with much pleasure to the time when it should bud and blossom, and fill the garden with its fragrance.

"What is the matter with you, Kate?" called her mother, from the house, when she heard Kate crying.

"I did not mean to do it, mother," sobbed the poor girl.

"Didn't mean to do what, Kate?" said her mother, rushing into the garden to find out what mischief had been done.

Mrs. Lamb was very angry when she saw that the peony was spoiled; and she took Kate by the arm, and shook her. I don't think this shaking did any good; but it was a great trial to her to see her favorite flower destroyed.

"But you were careless, as you always are. Will you never learn to be careful? You walk about the flower beds as though they were solid rocks."

"I did not mean to tread upon it," was all that poor Kate could say.

It was very true that she did not mean to spoil the peony; but it was almost as bad to ruin it by being careless. Children ought to understand that not meaning to do wrong is not a good excuse, when the wrong might have been prevented by being careful.

Suppose the captain of a ship should run his vessel on the rocks, and lose a dozen lives, by being careless; do you think people would be willing to trust him with another vessel afterwards?

Suppose the engineer should neglect to keep watch of the boiler, and it should burst; would not people blame him? Would they think it a good excuse if he said he did not mean to let it burst?

If the man who has the keeping of a powder house should smoke a pipe in it, and twenty persons should be killed by his carelessness, do you think it would be enough for him to say he did not intend to kill them...?