Captured by the Navajos

by Charles A. (Charles Albert) Curtis 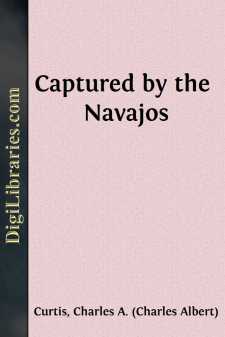 I INTRODUCES THE BOYS

It was late in the fall of the second year of the civil war that I rejoined my company at Santa Fé, New Mexico, from detached service in the Army of the Potomac. The boom of the sunrise gun awoke me on the morning after my arrival, and I hastened to attend reveille roll-call. As I descended the steps of the officers' quarters the men of the four companies composing the garrison were forming into line before their barracks. Details from the guard, which had just fired the gun and hoisted the national colors, were returning to the guard-house, and the officers were hastening to their places.

At the conclusion of the ceremony I turned again towards my quarters, and noticed two handsome boys, evidently aged about fifteen and thirteen, dressed in a modification of the infantry uniform of the army, and wearing corporals' chevrons. They stood near the regimental adjutant, and seemed to be reporting their presence to him.

At breakfast, the adjutant chancing to sit near me, I asked him who the youthful soldiers were.

"They are the sons of Lieutenant-Colonel Burton, Corporals Frank and Henry," he replied. "They hold honorary rank, and are attached to head-quarters, acting as messengers and performing some light clerical work."

"How do they happen to be in Santa Fé?"

"Mother recently died in the East, and the colonel had them sent here in charge of a tutor who is to fit them for college, I believe."

Later, on the same day, being desirous of looking over this ancient Indian and Mexican town, I was making a pedestrian tour of its streets, and chanced to be opposite San Miguel School in the eastern section during the pupils' recess. Half a dozen boys were engaged in throwing the lasso over the posts of the enclosing fence, when suddenly from a side street appeared the young corporals whom I had seen at reveille.

The Mexican boys instantly greeted them with derisive shouts and jeers. They called them little Gringos and other opprobrious names, and one young Mexican threw the loop of his lasso over the smaller corporal's head and jerked him off his feet. His companions laughed loudly. The older corporal instantly pulled out his knife and cut the rope. Then the two brothers stood shoulder to shoulder, facing the crowd, quite ready to defend themselves. The young Mexicans, gesticulating and shouting, crowded round the two brothers, and blows appeared imminent.

"Muchachos," suddenly cried a ringing voice from the rear, in Spanish, "are you not ashamed? A hundred against two!"

A handsome lad forced his way through the crowd, placed himself beside the two corporals, and faced his young countrymen. Before the Mexicans recovered from their surprise the bell of San Miguel summoned them to school. They hurried away, leaving the two corporals with the young Mexican who had come to their assistance.

"My name is Frank Burton," said the older corporal, extending his hand to the Mexican, "and this is my brother, Henry."

The Mexican boy grasped the proffered hand, and said, "My name is Manuel Perea, of Algodones."

"We are the sons of the commanding officer at the fort....