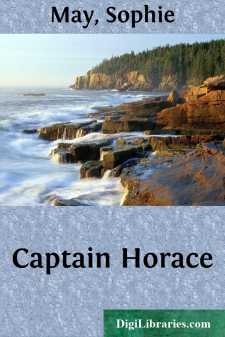 Grace and Horace Clifford lived in Indiana, and so were called "Hoosiers."

Their home, with its charming grounds, was a little way out of town, and from the front windows of the house you could look out on the broad Ohio, a river which would be very beautiful, if its yellow waters were only once settled. As far as the eye could see, the earth was one vast plain, and, in order to touch it, the sky seemed to stoop very low; whereas, in New England, the gray-headed mountains appear to go up part way to meet the sky.

One fine evening in May, brown-eyed Horace and blue-eyed Grace stood on the balcony, leaning against the iron railing, watching the stars, and chatting together.

One thing is very sure: they never dreamed that from this evening their sayings and doings—particularly Horace's—were to be printed in a book. If any one had whispered such a thing, how dumb Horace would have grown, his chin snuggling down into a hollow place in his neck! and how nervously Grace would have laughed! walking about very fast, and saying,—

"O, it's too bad, to put Horace and me in a book! I say it's too bad! Tell them to wait till my hair is curled, and I have my new pink dress on! And tell them to make Horace talk better! He plays so much with the Dutch boys. O, Horace isn't fit to print!"

This is what she might have said if she had thought of being "put in a book;" but as she knew nothing at all about it, she only stood very quietly leaning against the balcony-railing, and looking up at the evening sky, merry with stars.

"What a shiny night, Horace! What do the stars look like? Is it diamond rings?"

"I'll tell you, Gracie; it's cigars they look like—just the ends of cigars when somebody is smoking."

At that moment the cluster called the "Seven Sisters" was drowned in a soft, white cloud.

"Look," said Grace; "there are some little twinkles gone to sleep, all tucked up in a coverlet. I don't see what makes you think of dirty cigars! They look to me like little specks of gold harps ever so far off, so you can't hear the music. O, Horace, don't you want to be an angel, and play on a beautiful harp?"

"I don't know," said her brother, knitting his brows, and thinking a moment; "when I can't live any longer, you know, then I'd like to go up to heaven; but now, I'd a heap sooner be a soldier!"

"O, Horace, you'd ought to rather be an angel! Besides, you're too little for a soldier!"

"But I grow. Just look at my hands; they're bigger than yours, this minute!"

"Why, Horace Clifford, what makes them so black?"

"O, that's no account! I did it climbin' trees. Barby tried to scour it off, but it sticks. I don't care—soldiers' hands ain't white, are they, Pincher?"

The pretty dog at Horace's feet shook his ears, meaning to say,—

"I should think not, little master; soldiers have very dirty hands, if you say so."

"Come," said Grace, who was tired of gazing at the far-off star-land; "let's go down and see if Barbara hasn't made that candy: she said she'd be ready in half an hour."

They went into the library, which opened upon the balcony, through the passage, down the front stairs, and into the kitchen, Pincher following close at their heels....