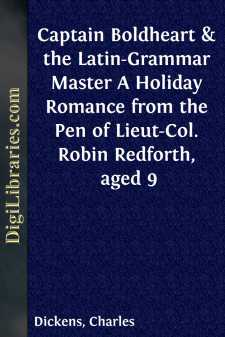 The story contained herein was written by Charles Dickens in 1867. It is the third of four stories entitled "Holiday Romance" and was published originally in a children's magazine in America. It purports to be written by a child aged nine. It was republished in England in "All the Year Round" in 1868. For this and four other Christmas pieces Dickens received £1,000.

"Holiday Romance" was published in book form by Messrs Chapman & Hall in 1874, with "Edwin Drood" and other stories.

For this reprint the text of the story as it appeared in "All the Year Round" has been followed.

The subject of our present narrative would appear to have devoted himself to the Pirate profession at a comparatively early age. We find him in command of a splendid schooner of one hundred guns, loaded to the muzzle, 'ere yet he had had a party in honour of his tenth birthday.

It seems that our hero, considering himself spited by a Latin-Grammar-Master, demanded the satisfaction due from one man of honour to another. Not getting it, he privately withdrew his haughty spirit from such low company, bought a second-hand pocket-pistol, folded up some sandwiches in a paper bag, made a bottle of Spanish liquorice-water, and entered on a career of valour.

It were tedious to follow Boldheart (for such was his name) through the commencing stages of his history. Suffice it that we find him bearing the rank of Captain Boldheart, reclining in full uniform on a crimson hearth-rug spread out upon the quarter-deck of his schooner the Beauty, in the China Seas. It was a lovely evening, and as his crew lay grouped about him, he favoured them with the following melody:

The soothing effect of these animated sounds floating over the waters, as the common sailors united their rough voices to take up the rich tones of Boldheart, may be more easily conceived than described.

It was under these circumstances that the lookout at the masthead gave the word, "Whales!"

All was now activity.

"Where away?" cried Captain Boldheart, starting up.

"On the larboard bow, sir," replied the fellow at the masthead, touching his hat. For such was the height of discipline on board of the Beauty, that even at that height he was obliged to mind it or be shot through the head.

"His crew lay grouped around him"

"This adventure belongs to me," said Boldheart. "Boy, my harpoon. Let no man follow;" and leaping alone into his boat, the captain rowed with admirable dexterity in the direction of the monster.

All was now excitement.

"He nears him!" said an elderly seaman, following the captain through his spy-glass.

"He strikes him!" said another seaman, a mere stripling, but also with a spy-glass.

"He tows him towards us!" said another seaman, a man in the full vigour of life, but also with a spy-glass.

In fact the captain was seen approaching, with the huge bulk following. We will not dwell on the deafening cries of "Boldheart!...