Canyons of the Colorado 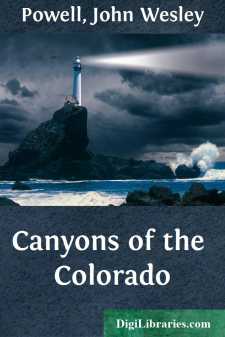 THE VALLEY OF THE COLORADO.

THE Colorado River is formed by the junction of the Grand and Green.

The Grand River has its source in the Rocky Mountains, five or six miles west of Long's Peak. A group of little alpine lakes, that receive their waters directly from perpetual snowbanks, discharge into a common reservoir known as Grand Lake, a beautiful sheet of water. Its quiet surface reflects towering cliffs and crags of granite on its eastern shore, and stately pines and firs stand on its western margin.

The Green River heads near Fremont's Peak, in the Wind River Mountains. This river, like the Grand, has its sources in alpine lakes fed by everlasting snows. Thousands of these little lakes, with deep, cold, emerald waters, are embosomed among the crags of the Rocky Mountains. These streams, born in the cold, gloomy solitudes of the upper mountain region, have a strange, eventful history as they pass down through gorges, tumbling in cascades and cataracts, until they reach the hot, arid plains of the Lower Colorado, where the waters that were so clear above empty as turbid floods into the Gulf of California.

The Green River is larger than the Grand and is the upper continuation of the Colorado. Including this river, the whole length of

CANYONS OF THE COLORADO.

the stream is about 2,000 miles. The region of country drained by the Colorado and its tributaries is about 800 miles in length and varies from 300 to 500 miles in width, containing about 300,000 square miles, an area larger than all the New England and Middle States with Maryland, Virginia and West Virginia added, or nearly as large as Minnesota, Wisconsin, Iowa, Illinois, and Missouri combined.

There are two distinct portions of the basin of the Colorado, a desert portion below and a plateau portion above. The lower third, or desert portion of the basin, is but little above the level of the sea, though here and there ranges of moun-

THE VALLEY OF THE COLORADO.

tains rise to an altitude of from 2,000 to 6,000 feet. This part of the valley is bounded on the northeast by a line of cliffs, which present a bold, often vertical step, hundreds or thousands of feet to the table-lands above. On the California side a vast desert stretches westward, past the head of the Gulf of California, nearly to the shore of the Pacific. Between the desert and the sea a narrow belt of valley, hill, and mountain of wonderful beauty is found. Over this coastal zone there falls a balm distilled from the great ocean, as gentle showers and refreshing dews bathe the land. When rains come the emerald hills laugh with delight as bourgeoning bloom is spread in the sunlight. When the rains have ceased all the verdure turns to gold....