Campaigns of a Non-Combatant, and His Romaunt Abroad During the War 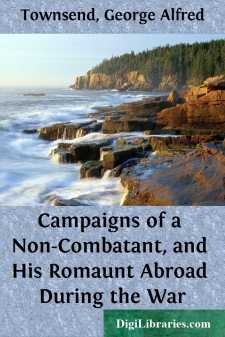 "Here is a piece of James Franklin's printing press, Mr. Townsend," said Mr. Pratt to me, at Newport the other day,—"Ben. Franklin wrote for the paper, and set type upon it. The press was imported from England in 1730, or thereabouts."

He produced a piece of wood, a foot in length, and then laid it away in its drawer very sacredly.

"I should like to write to that press, Mr. Pratt," I said,—"there would be no necessity in such a case of getting off six columns for to-night's mail."

"Well!" said Mr. Pratt, philosophically, "I have a theory that a man grows up to machinery. As your day so shall your strength be. I believe you have telegraphed up to a House instrument, haven't you?"

"Mr. Pratt," cried I, with some indignation, "your memory is too good. This is Newport, and I have come down to see the surf. Pray, do not remind me of hot hours in a newspaper office, the click of a Morse dispatch, and work far into the midnight!"

So I left Mr. Pratt, of the Newport Mercury, with an ostentation of affront, and bade James Brady, the boatman, hoist sail and carry me over to Dumpling Rocks.

On the grassy parapet of the crumbling tower which once served the purposes of a fort, the transparent water hungering at its base, the rocks covered with fringe spotting the channel, the ocean on my right hand lost in its own vastness, and Newport out of mind save when the town bells rang, or the dip of oars beat in the still swell of Narragansett,—— I lay down, chafing and out of temper, to curse the only pleasurable labor I had ever undertaken.

To me all places were workshops: the seaside, the springs, the summer mountains, the cataracts, the theatres, the panoramas of islet-fondled rivers speeding by strange cities. I was condemned to look upon them all with mercenary eyes, to turn their gladness into torpid prose, and speak their praises in turgid columns. Never nepenthe, never abandonne, always wide-awake, and watching for saliences, I had gone abroad like a falcon, and roamed at home like a hungry jackal. Six fingers on my hand, one long and pointed, and ever dropping gall; the ineradicable stain upon my thumb; the widest of my circuits, with all my adventure, a paltry sheet of foolscap; and the world in which I dwelt, no place for thought, or dreaminess, or love-making,—only the fierce, fast, flippant existence of news!

And with this inward execration, I lay on Dumpling Rocks, looking to sea, and recalled the first fond hours of my newspaper life.

To be a subject of old Hoe, the most voracious of men, I gave up the choice of three sage professions, and the sweet alternative of idling husbandry.

The day I graduated saw me an attaché of the Philadelphia Chameleon. I was to receive three dollars a week and be the heir to lordly prospects. In the long course of persevering years I might sit in the cushions of the night-editor, or speak of the striplings around me as "my reporters."

"There is nothing which you cannot attain," said Mr. Axiom, my employer,—"think of the influence you exercise!—more than a clergyman; Horace Greeley was an editor; so was George D. Prentice; the first has just been defeated for Congress; the last lectured last night and got fifty dollars for it."

Hereat I was greatly encouraged, and proposed to write a leader for next day's paper upon the evils of the Fire Department.

"Dear me," said Mr. Axiom, "you would ruin our circulation at a wink; what would become of our ball column? in case of a fire in the building we couldn't get a hose to play on it. Oh! no, Alfred, writing leaders is hard and dangerous; I want you first to learn the use of a beautiful pair of scissors."

I looked blank and chopfallen.

"No man can write a good hand or a good style," he said, "without experience with scissors. They give your palm flexibility and that is soon imparted to the mind. But perfection is attained by an alternate use of the scissors and the pen; if a little paste be prescribed at the same time, cohesion and steadfastness is imparted to the man."

His reasoning was incontrovertible; but I damned his conclusions....