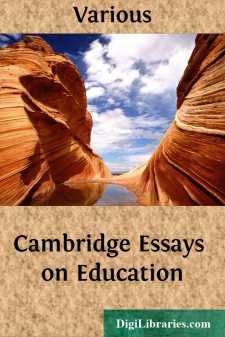 In times of anxiety and discontent, when discontent has engendered the belief that great and widespread economic and social changes are needed, there is a risk that men or States may act hastily, rushing to new schemes which seem promising chiefly because they are new, catching at expedients that have a superficial air of practicality, and forgetting the general theory upon which practical plans should be based. At such moments there is special need for the restatement and enforcement by argument of sound principles. To such principles so far as they relate to education it is the aim of these essays to recall the public mind. They cover so many branches of educational theory and deal with them so fully and clearly, being the work of skilled and vigorous thinkers, that it would be idle for me to enter in a short introduction upon those topics which they have discussed with special knowledge far greater than I possess. All I shall attempt is to present a few scattered observations on the general problems of education as they stand to-day.

The largest of those problems, viz., how to provide elementary instruction for the whole population, is far less urgent now than it was fifty years ago. The Act of 1870, followed by the Act which made school-attendance compulsory, has done its work. What is wanted now is Quality rather than Quantity. Quantity is doubtless needed in one respect. Children ought to stay longer at school and ought to have more encouragement to continue education after they leave the elementary school. But it is chiefly an improvement in the teaching that is wanted, and that of course means the securing of higher competence in the teacher by raising the remuneration and the status of the teaching profession.

The next problem is how to find the finest minds among the children of the country and bring them by adequate training to the highest efficiency. The sifting out of these best minds is a matter of educational organisation and machinery; and the process will become the easier when the elementary teachers, who ought to bear a part in selecting those who are most fitted to be sent on to secondary schools, have themselves become better qualified for the task of discrimination. The question how to train these best minds when sifted out would lead me into the tangled controversy as to the respective educational values of various subjects of instruction, a topic which I must not deal with here. What I do wish to dwell upon is the supreme importance to the progress of a nation of the best talent it possesses. In every country there is a certain percentage of the population who are fitted by their superior intelligence, industry, and force of character to be the leaders in every branch of action and thought. It is a small percentage, but it may be increased by discovering ability in places where the conditions do not favour its development, and setting it where it will have a better chance of growth, just as a seedling tree brought out of the dry shade may shoot up when planted where sun and rain can reach it freely....