California Romantic and Resourceful A plea for the collection, preservation and diffusion of information relating to Pacific coast history 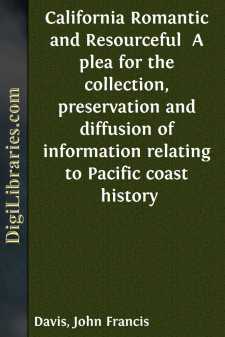 One of the most important acts of the Grand Parlor of the Native Sons of the Golden West which met at Lake Tahoe in 1910 was the appropriation of approximately fifteen hundred dollars for the creation of a traveling fellowship in Pacific Coast history at the State University. In pursuance of the resolution adopted, a committee of five was appointed by the head of the order to confer with the authorities of the university in the matter of this fellowship. The university authorities were duly notified, both of the appropriation for the creation of the fellowship and of the appointment of the committee, and the plan was put into practical operation. In 1911 this action was reaffirmed, and a resident fellowship was also created, making an appropriation of three thousand dollars, which has been repeated each year since. Henry Morse Stephens, Sather Professor of History, and Herbert E. Bolton, Professor of American History, and their able assistants in the history department of the university have hailed with delight this public-spirited movement on the part of that organization.

The object and design of these fellowships is to aid in the collection, preservation and publication of information and material relating to the history of the Pacific Coast. Archives at Querétaro and Mexico City, in Mexico, at Seville, Simancas and Madrid, in Spain, and in Paris, London and St. Petersburg are veritable treasure mines of information concerning our early Pacific Coast history, and the correspondence of many an old family and the living memory of many an individual pioneer can still furnish priceless records of a later period. Professor Stephens has elaborated a practical scheme for making available all these sources of historical information through the providence of these fellowships, as far as they reach.

The perpetuation of these traditions, the preservation of this history, is of the highest importance. Five years ago, at Monterey, upon the celebration of the anniversary of Admission Day, I took occasion to urge this view, and I have not ceased to urge it ever since. If we take any pride in our State, if the tendrils of affection sink into the soil where our fathers wrought, and where we ourselves abide and shall leave sons and daughters after us, if we know and feel any appreciation of local color, or take any interest in the drama of life that is being enacted on these Western shores, then the preservation of every shred of it is of vital importance to us—at least as Californians.

The early history of this coast came as an offshoot of a civilization whose antiquity was already respectable. "A hundred years before John Smith saw the spot on which was planted Jamestown," says Hubert H. Bancroft, "thousands from Spain had crossed the high seas, achieving mighty conquests, seizing large portions of the two Americas and placing under tribute their peoples."

The past of California possesses a wealth of romantic interest, a variety of contrast, a novelty of resourcefulness and an intrinsic importance that enthralls the imagination....