California Four Months among the Gold-Finders, being the Diary of an Expedition from San Francisco to the Gold Districts 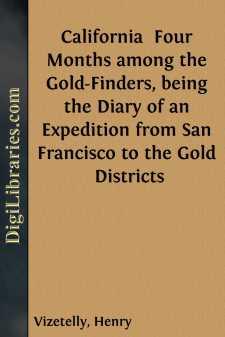 Clearing the Faranolles Making the entrance to the Bay of San Francisco The passage through the Strait Appearance of the Bay Town of San Francisco The anchor is let go The Author goes on shore His bad luck Sweeting's Hotel The Author and Mr. Malcolm propose visiting the American settlements They become acquainted with Captain Fulsom and Mr. Bradley Object of the Author's visit to California Mr. McPhail leaves for Sonoma The Houses of San Francisco, and their inhabitants Native California Senoritas and cigarettos.

... I felt heartily glad to hear that we were then clearing the Faranolles, and soon hurried up on deck, but we continued beating about for several hours before we made the entrance to the Bay of San Francisco. At length, however, we worked our way in between the two high bluffs, and along a strait a couple of miles wide and nearly five miles long, flanked on either side with bold broken hills—passing on our right hand the ricketty-looking fortifications erected by the Spaniards for the defence of the passage, but over which the Yankee stars and stripes were now floating. On leaving the strait we found ourselves on a broad sheet of rippling water looking like a great inland lake, hemmed in on all sides by lofty hills on which innumerable herds of cattle and horses were grazing, with green islands and clusters of rock rising up here and there, and a little fleet of ships riding at anchor. On our right was the town of San Francisco.

I had suffered so much from the voyage, that when the anchor was let go I felt no inclination to hurry on shore. McPhail and Malcolm, however, went off, but promised to return to the ship that night. I soon after turned into my hammock, and, thanks to the stillness of the water in which we rode, slept soundly till morning.

April 29th.—This morning we all rose early, and went on shore. The little baggage we had we took in the boat. Malcolm told me that he had heard the war was over between the United States and Mexico, and I bitterly congratulated myself on experiencing my usual run of bad luck. We made our way to Sweeting's hotel, which Malcolm and McPhail had visited yesterday, and stated to be the best of the three hotels which have sprung up here since the Americans became masters of the place.

Malcolm intends making an excursion to the interior. He proposes to visit the American settlements, and to satisfy himself as to the reputed advantages which California presents as an agricultural country. I have agreed to accompany him. We have fallen in with two very pleasant American gentlemen at our hotel to-day—one, a Captain Fulsom, holding some appointment under Government here; the other, a young friend of his named Bradley. We had some conversation together on the subject of the Mexican war, in the course of which I learnt that Mr. Bradley has been a resident in California for the last eight years, and that he was one of the officers of the volunteer corps attached to the army of the United States, while military operations were going on in this country....