California, 1849-1913; or, the rambling sketches and experiences of sixty-four years' residence in that state 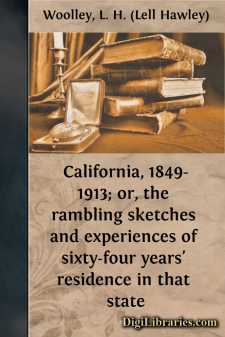 The year 1849 has a peculiarly thrilling sensation to the California Pioneer, not realized by those who came at a later date. My purpose in recording some of my recollections of early days is not for publication nor aggrandizement, but that it may be deposited in the archives of my descendants, that I was one of those adventurers who left the Green Mountains of Vermont to cross the plains to California, the El Dorado—the Land of Gold.

In starting out I went to Boston, New York, Philadelphia, Cincinnati, St. Louis and Independence, Missouri. Here I joined the first mule train of Turner, Allen & Co.'s Pioneer Line. It consisted of forty wagons, one hundred and fifty mules, and about one hundred and fifty passengers. We left the frontier on the fourteenth of May 1849, and here is where our hardships commenced. Many of us had never known what it was to "camp out" and do our own cooking. Some of the mules were wild and unbroken, sometimes inside the traces, sometimes outside; sometimes down, sometimes up; sometimes one end forward and sometimes the other; but after a week or two they got sobered down so as to do very well.

Our first campfire at night was on the Little Blue River, a few miles from Independence; it was after dark when we came to a halt, and it was my friend Gross' turn to cook, while the rest brought him wood and water and made a fire for him by the side of a large stump. I knew he was a fractious man, so I climbed into one of the wagons where I could see how he got along. The first thing that attracted my attention was the coffee pot upside down, next away went the bacon out of the pan into the fire. By this time he was getting warm inside as well as outside, and I could hear some small "cuss words"; next he looked into the Dutch oven, and saw that his dough had turned to charcoal. I got down into the wagon out of sight, and peeked through a crack; he grew furious, danced around the fire, and the air was full of big words. Finally we got a little coffee and some cakes and bacon, then I undertook to do a little sleeping but it was no go. Thus ended my first night on the Plains.

In the morning we started on our journey to travel over a level untimbered, uninhabited country for nearly four hundred miles, without anything of especial interest occurring save cholera, from which there was terrible suffering. We lost about seventy-five of our number before we reached Fort Laramie, seven hundred miles from Missouri.

There was a Dutchman in my mess by the name of Lamalfa, who understood but little of English. We had dubbed him "Macaroni" for having brought a lot of the stuff with him and on our second night out it came his turn to stand guard. He was detailed to the inner guard and instructed as to his duties. On the relief of the outer sentinel and his return to camp, Lamalfa issued the challenge which was to repeat three times "Who comes there?" and in case of no response to fire, and as the outer sentinel came upon him he called out "Who comes there three times" and fired; fortunately he was a poor shot and no harm was done.

It seems that "Macaroni" was not aware of there being an outer guard.

When near Fort Childs, four hundred miles out, all the passengers left the wagons, except the drivers, and walked on in advance, leaving the wagons light (they were canvas covered). There came up one of those terrible hailstorms, common in that country, which pelted the mules with such severity as to cause them to take fright and run away, breaking loose from the wagons which were taken by the storm in another direction, first wheels up, then top, until the latter was all in rags; then they stopped....