Caleb in the Country 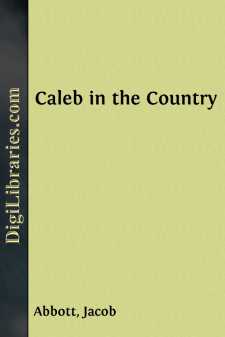 Caleb was a bright-looking, blue-eyed boy, with auburn hair and happy countenance. And yet he was rather pale and slender. He had been sick. His father and mother lived in Boston, but now he was spending the summer at Sandy River country, with his grandmother. His father thought that if he could run about a few months in the open air, and play among the rocks and under the trees, he would grow more strong and healthy, and that his cheeks would not look so pale.

His grandmother made him a blue jacket with bright buttons. She liked metal buttons, because they would wear longer than covered ones, but he liked them because they were more beautiful. “Besides,” said he, “I can see my face in them, grandmother.”

Little Caleb then went to the window, so as to see his face plainer. He stood with his back to the window, and held the button so that the light from the window could shine directly upon it.

“Why grandmother,” said Caleb, “I cannot see now so well as I could before.”

“That is because your face is turned away from the light,” said she.

“And the button is turned towards the light,” said Caleb.

Then Caleb turned around, so as to have his face towards the light; and he found that he could then see it reflected very distinctly. His grandmother went on with her work, and Caleb sat for some time in silence.

The house that Caleb lived in was in a narrow rocky valley. A stream of water ran over a sandy bed, in front of the house, and a rugged mountain towered behind it. Across the stream, too, there was a high, rocky hill, which was in full view from the parlour window. This hill was covered with wild evergreens, which clung to their sides, and to the interstices of the rocks; and mosses, green and brown, in long festoons, hung from their limbs. Here and there crags and precipices peeped out from among the foliage, and a grey old cliff towered above, at the summit.

“O, grandmother,” said he again, “I can see the rocks in my buttons, and the trees. And there is an old stump,” he continued, his voice falling to a low tone, as if he was talking to himself,—“and there is a tree,—and,—why—why, what is that? It is a bear, grandmama,”—calling aloud to her,—“I see a bear upon the mountain.”

“I do certainly,” said Caleb, and he dropped the corner of his jacket, which had the button attached to it, and looked out of the window directly at the mountain.

Presently Caleb turned away from the window, and ran to the door. There was a little green yard in front of the house, with a large, smooth, flat stone for a door-step....