By Shore and Sedge 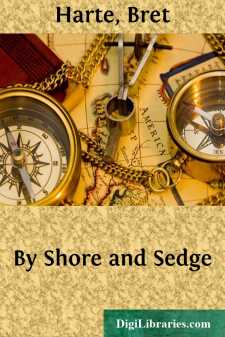 On October 10, 1856, about four hundred people were camped in Tasajara Valley, California. It could not have been for the prospect, since a more barren, dreary, monotonous, and uninviting landscape never stretched before human eye; it could not have been for convenience or contiguity, as the nearest settlement was thirty miles away; it could not have been for health or salubrity, as the breath of the ague-haunted tules in the outlying Stockton marshes swept through the valley; it could not have been for space or comfort, for, encamped on an unlimited plain, men and women were huddled together as closely as in an urban tenement-house, without the freedom or decency of rural isolation; it could not have been for pleasant companionship, as dejection, mental anxiety, tears, and lamentation were the dominant expression; it was not a hurried flight from present or impending calamity, for the camp had been deliberately planned, and for a week pioneer wagons had been slowly arriving; it was not an irrevocable exodus, for some had already returned to their homes that others might take their places. It was simply a religious revival of one or two denominational sects, known as a "camp-meeting."

A large central tent served for the assembling of the principal congregation; smaller tents served for prayer-meetings and class-rooms, known to the few unbelievers as "side-shows"; while the actual dwellings of the worshipers were rudely extemporized shanties of boards and canvas, sometimes mere corrals or inclosures open to the cloudless sky, or more often the unhitched covered wagon which had brought them there. The singular resemblance to a circus, already profanely suggested, was carried out by a straggling fringe of boys and half-grown men on the outskirts of the encampment, acrimonious with disappointed curiosity, lazy without the careless ease of vagrancy, and vicious without the excitement of dissipation. For the coarse poverty and brutal economy of the larger arrangements, the dreary panorama of unlovely and unwholesome domestic details always before the eyes, were hardly exciting to the senses. The circus might have been more dangerous, but scarcely more brutalizing. The actors themselves, hard and aggressive through practical struggles, often warped and twisted with chronic forms of smaller diseases, or malformed and crippled through carelessness and neglect, and restless and uneasy through some vague mental distress and inquietude that they had added to their burdens, were scarcely amusing performers. The rheumatic Parkinsons, from Green Springs; the ophthalmic Filgees, from Alder Creek; the ague-stricken Harneys, from Martinez Bend; and the feeble-limbed Steptons, from Sugar Mill, might, in their combined families, have suggested a hospital, rather than any other social assemblage. Even their companionship, which had little of cheerful fellowship in it, would have been grotesque but for the pathetic instinct of some mutual vague appeal from the hardness of their lives and the helplessness of their conditions that had brought them together. Nor was this appeal to a Higher Power any the less pathetic that it bore no reference whatever to their respective needs or deficiencies, but was always an invocation for a light which, when they believed they had found it, to unregenerate eyes scarcely seemed to illumine the rugged path in which their feet were continually stumbling. One might have smiled at the idea of the vendetta-following Ferguses praying for "justification by Faith," but the actual spectacle of old Simon Fergus, whose shot-gun was still in his wagon, offering up that appeal with streaming eyes and agonized features was painful beyond a doubt. To seek and obtain an exaltation of feeling vaguely known as "It," or less vaguely veiling a sacred name, was the burden of the general appeal.

The large tent had been filled, and between the exhortations a certain gloomy enthusiasm had been kept up by singing, which had the effect of continuing in an easy, rhythmical, impersonal, and irresponsible way the sympathies of the meeting. This was interrupted by a young man who rose suddenly, with that spontaneity of impulse which characterized the speakers, but unlike his predecessors, he remained for a moment mute, trembling and irresolute....