Buxton and its Medicinal Waters 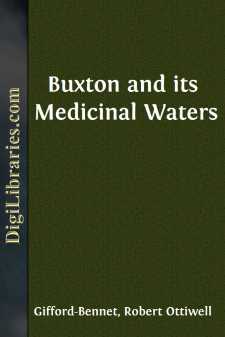 The ancient town of Buxton, which is situated upon the extreme western boundary of the county of Derby, at an elevation of 1,000ft. above the sea level, lies in a deep basin, having a subsoil of limestone and millstone grit, and is environed on every side by some of the most romantic and picturesque scenery in the High Peak, hill rising above hill in wild confusion, some attaining an altitude of from 1,900ft. to 2,000ft.

Buxton, or, as originally called, Bawkestanes, was occupied as a military station by the Romans, who, during their occupancy, constructed baths over the tepid water springs which issue through fissures in the limestone rock, where it comes in contact with the millstone grit, as was proved beyond doubt by the finding of Roman tiles (used in the construction of their baths) some years ago, when the present baths were under repair.

Although Buxton is situated at so great an altitude, the mean temperature for years past (owing, no doubt, in a great measure, to the taste displayed and forethought shown by the late Mr. Heacock, agent for many years to his Grace the Duke of Devonshire, in causing the surrounding hills to be well planted) has averaged about 44° Fahr., only a few degrees below that of some of the most frequented winter resorts in Great Britain.  Such a temperature, however, may appear to some to militate against Buxton as a health resort except during the summer months, but it must be borne in mind that although the temperature may be said to be somewhat low (a necessity of its altitude), yet the atmosphere is especially pure and dry, and, like that of Davos Platz, plays no inconsiderable part in conducing to the highly-sanitary condition of the neighbourhood.

The healthiness of the Buxton district is borne out by the fact that the death-rate from zymotic disease is lower than that of most other localities in Great Britain, and that the average annual death-rate from all forms of disease is only (among the resident population) 10 in 1,000.

The air being so pure and dry exerts a most bracing and tonic effect, especially in cases where the system has become debilitated from any cause—anæmia, chlorosis, chronic liver and splenic disease, many forms of bronchial asthma, the first stage of tuberculosis of the lungs, and tubercular degeneration of the mesenteric glands in childhood, I have seen much benefitted by a short residence in the district.  To the closely-confined and overworked residents in towns the crispness and buoyancy of the atmosphere impart a feeling of lightness and exhilaration rarely experienced except in a highland district, making mental and physical labour less irksome and life more enjoyable.

The water supply of Buxton is abundant, soft, and free from impurities, doubtless owing to its percolating through the great filter bed of sandstone to the north of the town, and issues in numerous springs far above any source of contamination from the inhabitants in the valley below....