Buttered Side Down: Stories 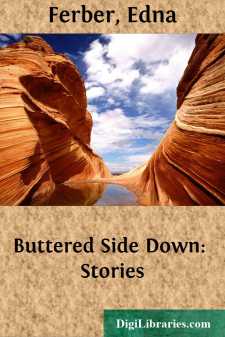 THE FROG AND THE PUDDLE

Any one who has ever written for the magazines (nobody could devise a more sweeping opening; it includes the iceman who does a humorous article on the subject of his troubles, and the neglected wife next door, who journalizes) knows that a story the scene of which is not New York is merely junk. Take Fifth Avenue as a framework, pad it out to five thousand words, and there you have the ideal short story.

Consequently I feel a certain timidity in confessing that I do not know Fifth Avenue from Hester Street when I see it, because I've never seen it. It has been said that from the latter to the former is a ten-year journey, from which I have gathered that they lie some miles apart. As for Forty-second Street, of which musical comedians carol, I know not if it be a fashionable shopping thoroughfare or a factory district.

A confession of this kind is not only good for the soul, but for the editor. It saves him the trouble of turning to page two.

This is a story of Chicago, which is a first cousin of New York, although the two are not on chummy terms. It is a story of that part of Chicago which lies east of Dearborn Avenue and south of Division Street, and which may be called the Nottingham curtain district.

In the Nottingham curtain district every front parlor window is embellished with a "Rooms With or Without Board" sign. The curtains themselves have mellowed from their original department-store-basement-white to a rich, deep tone of Chicago smoke, which has the notorious London variety beaten by several shades. Block after block the two-story-and-basement houses stretch, all grimy and gritty and looking sadly down upon the five square feet of mangy grass forming the pitiful front yard of each. Now and then the monotonous line of front stoops is broken by an outjutting basement delicatessen shop. But not often. The Nottingham curtain district does not run heavily to delicacies. It is stronger on creamed cabbage and bread pudding.

Up in the third floor back at Mis' Buck's (elegant rooms $2.50 and up a week. Gents preferred) Gertie was brushing her hair for the night. One hundred strokes with a bristle brush. Anyone who reads the beauty column in the newspapers knows that. There was something heroic in the sight of Gertie brushing her hair one hundred strokes before going to bed at night. Only a woman could understand her doing it.

Gertie clerked downtown on State Street, in a gents' glove department. A gents' glove department requires careful dressing on the part of its clerks, and the manager, in selecting them, is particular about choosing "lookers," with especial attention to figure, hair, and finger nails. Gertie was a looker. Providence had taken care of that. But you cannot leave your hair and finger nails to Providence. They demand coaxing with a bristle brush and an orangewood stick.

Now clerking, as Gertie would tell you, is fierce on the feet. And when your feet are tired you are tired all over. Gertie's feet were tired every night. About eight-thirty she longed to peel off her clothes, drop them in a heap on the floor, and tumble, unbrushed, unwashed, unmanicured, into bed....