Business Hints for Men and Women 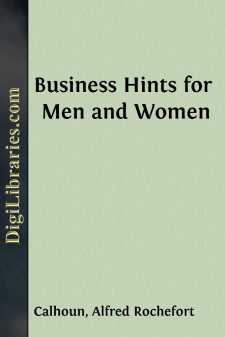 The three things essential to all wealth production are land, labor, and capital.

"The dry land" was created before there appeared the man, the laborer, to work it. With his bare hands the worker could have done nothing with the land either as a grazer, a farmer or a miner. From the very first he needed capital, that is, the tools to work the land.

The first tool may have been a pole, one end hardened in the fire, or a combined hoe and axe, made by fastening with wythes, a suitable stone to the end of a stick; but no matter the kind of tool, or the means of producing it, it represented capital, and the man who owned this tool was a capitalist as compared with the man without any such appliance.

From the land, with the aid of labor and capital, comes wealth, which in a broad way may be defined as something having an exchangeable value.

Before the appearance of money all wealth changed hands through barter. The wealth in the world to-day is immeasurably greater than all the money in it. The business of the world, particularly between nations, is still carried on through exchange, the balances being settled by money.

Money is a medium of exchange, and should not be confounded with wealth or capital; the latter is that form of wealth which is used with labor in all production.

Broadly speaking, wealth is of two kinds, dormant and active. The former awaits the development of labor and capital, the latter is the product of both.

The successful farmer must be a skilled laborer, no matter the amount of his manual work. The unskilled farmer can never succeed largely, no matter how hard he works.

Too many farmers live in the ruts cut by their great-great- grandfathers. They still balance the corn in the sack with a stone.

Farming is the world's greatest industry. All the ships might be docked, all the factory wheels stopped, and all the railroads turned to streaks of rust, and still the race would survive, but let the plow lie idle for a year and man would perish as when the deluge swept the mountain tops.

The next census will show considerably over 6,000,000 farms in the United States. Farming is the greatest of all industries, as it is the most essential. Our Government has wisely made the head of the Department of Agriculture a cabinet officer, and the effect on our farming interest is shown in improved methods and a larger output of better quality.

The hap-hazard, unskilled methods of the past are disappearing. Science is lending her aid to the tiller of the soil, and the wise ones are reaching out their hands in welcome.

As farming is our principal business, it follows that those who conduct this vast and varied enterprise should be business men.

The farmer is a producer of goods, and so might be regarded as a manufacturer,—the original meaning of the word is one who makes things by hand....