Bunyip Land A Story of Adventure in New Guinea 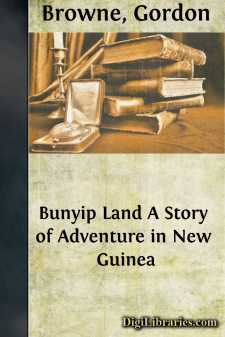 How I made my Plans and they were Endorsed.

“Now, Master Joseph, do adone now, do. I’m sure your poor dear eyes’ll go afore you’re forty, and think of that!”

“You’re always running your finger over that map thing, my dear. I can’t abear to see it.”

Nurse Brown looked over the top of her spectacles at me and shook her head, while I bent lower over the map.

Then the old lady sighed, and went on making cottage windows all over my worsted stockings, giving vent to comments all the time, for the old lady had been servant to my grandmother, and had followed her young mistress when she married, nursing me when I was born, and treating me as a baby ever since. In fact she had grown into an institution at home, moving when we moved, and doing pretty well as she liked in what she called “our house.”

“Bless the boy! don’t bang the table like that,” she cried. “How you made me jump!”

“Go and find my poor dear father,” I cried. “Why, nurse, am I to sit down quietly at home here, when perhaps my poor father is waiting for me to come to his help?”

“He isn’t, nurse,” I cried fiercely. “He’s a prisoner somewhere among those New Guinea savages, and I mean to find him and bring him back.”

Nurse Brown thrust her needle into the big round ball of worsted, and held it up as if for me to see. Then she took off her glasses with the left hand in the stocking, and shaking her head she exclaimed:

“Oh, you bad boy; wasn’t it enough for your father to go mad after his botaniky, and want to go collecting furren buttercups and daisies, to break your mother’s heart, that you must ketch his complaint and want to go too?”

“Your father was mad,” retorted Nurse Brown, “and I was surprised at him. What did he ever get by going wandering about collecting his dry orchardses and rubbish, and sending of ’em to England?”

“Why, four different plants were named after him.”

“Oh, stuff and rubbish, boy! What’s the good of that when a man gets lost and starves to death in the furren wilds!”

“My father was too clever a man to get lost or to starve in the wilds,” I said proudly. “The savages have made him a prisoner, and I’m going to find him and bring him back.”

“Ah! you’ve gone wandering about with that dirty black till you’ve quite got into his ways.”

“Jimmy isn’t dirty,” I said; “and he can’t help being black any more than you can being white.”

“I wonder at a well-brought-up young gent like you bemeaning yourself to associate with such a low creature, Master Joseph.”

“Gentleman, indeed!” cried the old lady, “as goes about without a bit of decent clothes to his back.”