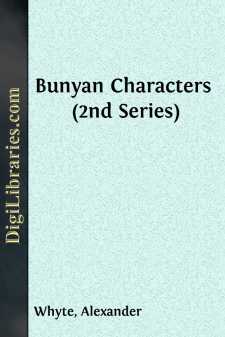 “I was alive without the law once.”—Paul.

“I was now a brisk talker also myself in the matter of religion.”—Bunyan.

This is a new kind of pilgrim.  There are not many pilgrims like this bright brisk youth.  A few more young gentlemen like this, and the pilgrimage way would positively soon become fashionable and popular, and be the thing to do.  Had you met with this young gentleman in society, had you noticed him beginning to come about your church, you would have lost no time in finding out who he was.  I can well believe it, you would have replied.  Indeed, I felt sure of it.  I must ask him to the house.  I was quite struck with his appearance and his manners.  Yes; ask him at once to your house; show him some pointed attentions and you will never regret it.  For if he goes to the bar and works even decently at his cases, he will be first a sheriff and then a judge in no time.  If he should take to politics, he will be an under-secretary before his first parliament is out.  And if he takes to the church, which is not at all unlikely, our West-end congregations will all be competing for him as their junior colleague; and, if he elects either of our Established churches to exercise his profession in it, he will have dined with Her Majesty while half of his class-fellows are still half-starved probationers.  Society fathers will point him out with anger to their unsuccessful sons, and society mothers will smile under their eyelids as they see him hanging over their daughters.

Well, as this handsome and well-appointed youth stepped out of his own neat little lane into the rough road on which our two pilgrims were staggering upward, he felt somewhat ashamed to be seen in their company.  And I do not wonder.  For a greater contrast you would not have seen on any road in all that country that day.  He was at your very first sight of him a gentleman and the son of a gentleman.  A little over-dressed perhaps; as, also, a little lofty to the two rather battered but otherwise decent enough men who, being so much older than he, took the liberty of first accosting him.  “Brisk” is his biographer’s description of him.  Feather-headed, flippant, and almost impudent, you might have been tempted to say of him had you joined the little party at that moment.  But those two tumbled, broken-winded, and, indeed, broken-hearted old men had been, as an old author says, so emptied from vessel to vessel—they had had a life of such sloughs and stiff climbs—they had been in hunger and thirst, in cold and nakedness so often—that it was no wonder that their dandiacal companion walked on a little ahead of them.  ‘Gentlemen,’ his fine clothes and his cane and his head in the air all said to his two somewhat disreputable-looking fellow-travellers,—“Gentlemen, you be utter strangers to me: I know you not.  And, besides, I take my pleasure in walking alone, even more a great deal than in company, unless I like it better.”  But all his society manners, and all his costly and well-kept clothes, and all his easy and self-confident airs did not impose upon the two wary old pilgrims.  They had seen too much of the world, and had been too long mixing among all kinds of pilgrims, young and old, true and false, to be easily imposed upon.  Besides, as one could see from their weather-beaten faces, and their threadbare garments, they had found the upward way so dreadfully difficult that they both felt a real apprehension as to the future of this light-hearted and light-headed youth.  “You may find some difficulty at the gate,” somewhat bluntly broke in the oldest of the two pilgrims on their young comrade.  “I shall, no doubt, do at the gate as other good people do,” replied the young gentleman briskly.  “But what have you to show at the gate that may cause that the gate be opened to you?”  “Why, I know my Lord’s will, and I have been a good liver all my days, and I pay every man his own.  I pray, moreover, and I fast.  I pay tithes, and give alms, and have left my country for whither I am going.”  Now, before we go further: Do all you young gentlemen do as much as that?  Have you always been good livers?  Have you paid every man and woman their due?  Do you pray to be called prayer?  And, if so, when, and where, and what for, and how long at a time?  I do not ask if your private prayer-book is like Bishop Andrewes’ Devotions, which was so reduced to pulp with tears and sweat and the clenching of his agonising hands that his literary executors were with difficulty able to decipher it.  Clito in the Christian Perfection was so expeditious with his prayers that he used to boast that he could both dress and do his devotions in a quarter of an hour.  What was the longest time you ever took to dress or undress and say your prayers?  Then, again, there is another Anglican young gentleman in the same High Church book who always fasts on Good Friday and the Thirtieth of January.  Did you ever deny yourself a glass of wine or a cigar or an opera ticket for the church or the poor?  Could you honestly say that you know what tithes are?  And is there a poor man or woman or child in this whole city who will by any chance put your name into their prayers and praises at bedtime to-night?  I am afraid there are not many young gentlemen in this house to-night who could cast a stone at that brisk lad Ignorance, Vain-Hope, door in the side of the hill, and all.  He was not far from the kingdom of heaven; indeed, he got up to the very gate of it.  How many of you will get half as far...?