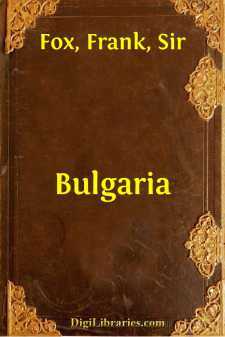 BY WAY OF INTRODUCTION

Instructed in the autumn of 1912 to join the Bulgarian army, then mobilising for war against Turkey, as war correspondent for the London Morning Post, I made my preparations with the thought uppermost that I was going to a cut-throat country where massacre was the national sport and human life was regarded with no sentimental degree of respect. The Bulgarians, a generation ago, had been paraded before the eyes of the British people by the fiery eloquence of Mr. Gladstone as a deeply suffering people, wretched victims of Turkish atrocities. After the wide sympathy that followed his Bulgarian Atrocities campaign there came a strong reaction. It was maintained that the Bulgarians were by no means the blameless victims of the Turks; and could themselves initiate massacres as well as suffer from them. Some even charged that there was a good deal of party spirit to account for the heat of Mr. Gladstone's championship. I think that the average British opinion in 1912 was that, regarding the quarrels between Bulgar and Turk, there was a great deal to be said against both sides; and that no Balkan people was worth a moment's sentimental worry. "Let dogs delight to bark and bite, for 'tis their nature to," expressed the common view when one heard that there had been murders and village-burnings again in the Balkans.

Certainly there were enthusiasts who held to the old Gladstonian faith that there was some peculiar merit in the Bulgarian people which justified all that they did, and which would justify Great Britain in going into the most dangerous of wars on their behalf. These enthusiasts, as if to make more startlingly clear their love for Bulgaria, commonly took a profoundly pacific view of all other questions of international politics, and would become passionately indignant at the suggestion that the British Power should ever move navy or army in defence of any selfish British interest. They were—they still are, it may be said—the leading lights of what is called the Peace-at-any-price party, detesting war and "jingoism," and viewing patriotism, when found growing on British soil, with dry suspicion. Patriotism in Bulgaria is, however, to their view a growth of a different order, worthy to be encouraged and sheltered at any cost.

As a counter-weight to these enthusiasts, Great Britain sheltered a little band, usually known as pro-Turks, who believed, with almost as passionate a sincerity as that of the pro-Bulgarians, that the Turk was the only gentleman in Europe, and that his mild and blameless aspirations towards setting up the perfect State were being cruelly thwarted by the abominable Bulgars and other Balkan riff-raff. Good government in the Balkans would come, they held, if the tide of Turkish rule flowed forward and the restless, semi-savage, murderous Balkan Christian states went back to peace and philosophic calm under the wise rule of Cadi administering the will of the Khalifate.

But pro-Bulgarian and pro-Turk made comparatively few converts in Great Britain....