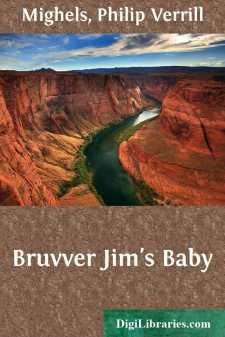 CHAPTER I A MIGHTY LITTLE HUNTER

It all commenced that bright November day of the Indian rabbit drive and hunt. The motley army of the Piute tribe was sweeping tremendously across a sage-brush valley of Nevada, their force two hundred braves in number. They marched abreast, some thirty yards apart, and formed a line that was more than two miles long.

The spectacle presented was wonderful to see. Red, yellow, and indigo in their blankets and trappings, the hunters dotted out a line of color as far as sight could reach. Through the knee-high brush they swept ahead like a firing-line of battle, their guns incessantly booming, their advance never halted, their purpose as grim and inexorable as fate itself. Indeed, Death, the Reaper, multiplied two-hundred-fold and mowing a swath of incredible proportions, could scarcely have pillaged the land of its conies more thoroughly.

Behind the army, fully twenty Indian ponies, ridden by the youngster-braves of the cavalcade, were bearing great white burdens of the slaughtered hares.

The glint of gun-barrels, shining in the sun, flung back the light, from end to end of the undulating column. Billows of smoke, out-puffing unexpectedly, anywhere and everywhere along the line, marked down the tragedies where desperate bunnies, scudding from cover and racing up or down before the red men, were targets for fiercely biting hail of lead from two or three or more of the guns at once.

And nearly as frightened as the helpless creatures of the brush was a tiny little pony-rider, back of the army, mounted on a plodding horse that was all but hidden by its load of furry game. He was riding double, this odd little bit of a youngster, with a sturdy Indian boy who was on in front. That such a timid little dot of manhood should have been permitted to join the hunt was a wonder. He was apparently not more than three years old at the most. With funny little trousers that reached to his heels, with big brown eyes all eloquent of doubt, and with round, little, copper-colored cheeks, impinged upon by an old fur cap he wore, pulled down over forehead and ears, he appeared about as quaint a little man as one could readily discover.

But he seemed distressed. And how he did hang on! The rabbits secured upon the pony were crowding him backward most alarmingly. At first he had clung to the back of his fellow-rider's shirt with all the might and main of his tiny hands. As the burden of the rabbits had increased, however, the Indian hunters had piled them in between the timid little scamp and his sturdier companion, till now he was almost out on the horse's tail. His alarm had, therefore, become overwhelming. No fondness for the nice warm fur of the bunnies, no faith in the larger boy in front, could suffice to drive from his tiny face the look of woe unutterable, expressed by his eyes and his trembling little mouth....