Bronchoscopy and Esophagoscopy A Manual of Peroral Endoscopy and Laryngeal Surgery 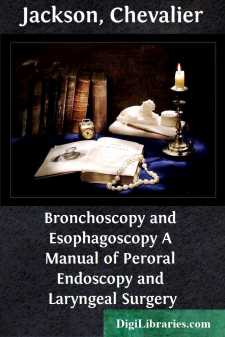 Direct laryngoscopy, bronchoscopy, esophagoscopy and gastroscopy are procedures in which the lower air and food passages are inspected and treated by the aid of electrically lighted tubes which serve as specula to manipulate obstructing tissues out of the way and to bring others into the line of direct vision. Illumination is supplied by a small tungsten-filamented, electric, "cold" lamp situated at the distal extremity of the instrument in a special groove which protects it from any possible injury during the introduction of instruments through the tube. The bronchi and the esophagus will not allow dilatation beyond their normal caliber; therefore, it is necessary to have tubes of the sizes to fit these passages at various developmental ages. Rupture or even over-distention of a bronchus or of the thoracic esophagus is almost invariably fatal. The armamentarium of the endoscopist must be complete, for it is rarely possible to substitute, or to improvise makeshifts, while the bronchoscope is in situ. Furthermore, the instruments must be of the proper model and well made; otherwise difficulties and dangers will attend attempts to see them.

Laryngoscopes.—The regular type of laryngoscope shown in Fig. I (A, B, C) is made in adult's, child's, and infant's sizes. The instruments have a removable slide on the top of the tubular portion of the speculum to allow the removal of the laryngoscope after the insertion of the bronchoscope through it. The infant size is made in two forms, one with, the other without a removable slide; with either form the larynx of an infant can be exposed in but a few seconds and a definite diagnosis made, without anesthesia, general or local; a thing possible by no other method. For operative work on the larynx of adults, such as the removal of benign growths, particularly when these are situated in the anterior portion of the larynx, a special tubular laryngoscope having a heart-shaped lumen and a beveled tip is used. With this instrument the anterior commissure is readily exposed, and because of this it is named the anterior commissure laryngoscope (Fig. 1, D). The tip of the anterior commissure laryngoscope can be used to expose either ventricle of the larynx by lifting the ventricular band, or it may be passed through the adult glottis for work in the subglottic region. This instrument may also be used as an esophageal speculum and as a pleuroscope. A side-slide laryngoscope, used with or without the slide, is occasionally useful.

Bronchoscopes.—The regular bronchoscope is a hollow brass tube slanted at its distal end, and having a handle at its proximal or ocular extremity. An auxiliary canal on its under surface contains the light carrier, the electric bulb of which is situated in a recess in the beveled distal end of the tube. Numerous perforations in the distal part of the tube allow air to enter from other bronchi when the tube-mouth is inserted into one whose aerating function may be impaired. The accessory tube on the upper surface of the bronchoscope ends within the lumen of the bronchoscope, and is used for the insufflation of oxygen or anesthetics, (Fig....