Broken Bread from an Evangelist's Wallet 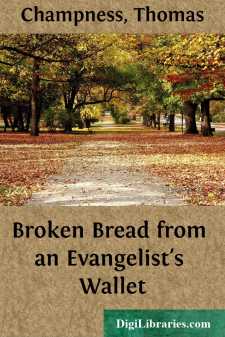 This is a book made up of fragments.  The Master once said “Gather up the fragments that nothing be lost.”  It may be that victuals will be found here that may feed those who cannot sit down to a meal.  Many of the articles have appeared in Joyful News already, but, perhaps, are none the worse for that.  We send out this little book in the hope that both crust and crumb will be eaten!

If the men who farmed England in the olden time could return, few things would surprise them more than the condition of the land.  Many a field now bearing good crops each year, was in “the good old times” moorland or fen.  Sheep and cattle graze where once only wild birds could live.  Drainage has made the change.  The land, once too cold and wet to allow anything valuable to grow, has been by grips and drain pipes, made to produce food for man and beast.

Is it not so on God’s farm?  “Ye are His husbandry,” and just as the farmer knows that if he cannot have his wet land drained, his seed will be starved, or the young corn perish with the cold, so we who toil in the Lord’s fields need to learn that in many places the first thing to be done is to

Do any of our readers complain that they cannot get an answer to their prayers for a revival, and that all the preaching and teaching seem to be wasted?  Let us advise them to look under the surface.  Are there not

Causes for the Failure?

Would it not be well to try what draining the land would do?  Are the most influential men cold and unresponsive to the call of the Spirit?  What sort of people take the lead in the prayer meetings?  Are they left to the zealous poor?  Does every man of wealth and culture hurry home and leave the preacher to shift for himself?  Who are the stewards?  Are they men who will do their utmost to welcome strangers, or does their example tell on others so much that a visitor never has a word of welcome or a grip of the hand?  What is the singing like?  Is it of the colourless, tame style, whose only sign of life is the rapid gallop which kills devotion in so many places?

How is the Bible read by the preacher?  Does he confine himself to the narrow round which he has read so often in the ears of the people that it has lost its charm—or does he seek out that which will be sure to interest; and does he read as if he believed it?

We think our readers know some congregations in which there can be no revival until the drainer has been at work, and that which starves the seed removed.  What we want is to have the question asked at the next leader’s or quarterly meeting.

What will it cost to get some drain-pipes?

The story of Moses teaches us that little folks are very helpless.  There he is in that basket.  He cannot care for himself.  He is in the power of the king’s daughter.  If she liked she could have had him killed, for it was plain to be seen that he was one of the Hebrew children.  When you were in your cradle how weak you were, how helpless.  If your mother had not cared for you, my dear boy, you would never have troubled the tailor to measure you for your new suit.  Do you ever think how much you are in your mother’s debt?  When you were hungry she fed you, when you were cold she warmed you, when you were sick she nursed you.  And you can pay her back.  Not in money, for when you are old enough to earn gold you will not be rich enough to do that; but you can reward her by obedience, by love, and by letting her know by your kindness that you do not forget what she did for you years ago....