Brighter Britain! (Volume 1 of 2) or Settler and Maori in Northern New Zealand 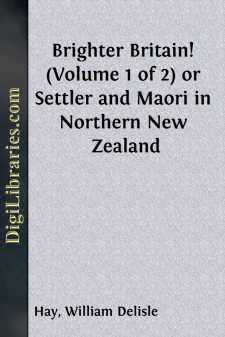 CHAPTER I. A "NEW-CHUM'S" INTRODUCTION.

Three months on board ship seems a long while to look forward to, yet it is but a short time to look back upon. Emigrants, being for the most part drawn from among dry-land-living populations, are apt to be daunted by the idea of a long voyage. People would be more ready, perhaps, to contemplate becoming colonists, were it not for that dreaded crossing of the sea which must necessarily be their first step. Their terrors may be natural enough, but they are more fanciful than real; and once overcome, the emigrant smiles at his former self.

After the first week or two at sea, the most inveterate "land-lubber" begins to feel at home; in another week or two he has become quite nautical, and imagines himself to have been a sailor half his life; while, when the voyage is over and the time come to go ashore, there are few who leave their floating home without regret.

As things are managed nowadays, there exists no reason for apprehension of the voyage on the part of would-be colonists. Emigrants who are taken out "free"—that is, at the expense of the colonial government—as well as those who pay their own passage, are cared for in most liberal and considerate style. The rivalry between the various colonies of Australia has had this effect among others—that the voyage is made as safe, smooth, and inviting to emigrants as is possible. They are berthed with an ever-increasing attention to their care and comfort, while they are absolutely pampered and fattened with abundance and variety of the best food.

No one expects to commence life in a new country without undergoing some amount of hardship and difficulty, and when the emigrant gets on shore, and begins to experience the various little annoyances that a "new-chum" must necessarily undergo, he realizes most thoroughly the pleasures and comforts he has left behind him on board ship; and, very frequently, vainly endeavours to suppress the wish that he was back on board "the old hooker" making the voyage out over again.

As to danger, nothing amuses an old salt more than the bare idea of the "perils of the sea." To him, a railway journey, short or long, appears an infinitely more terrible and risky undertaking than a voyage half round the globe; and he will enumerate the various dangers to which a landsman is exposed as vastly in excess of those which may happen to the mariner.

Life on board an emigrant-ship would, it might be thought, be somewhat dull and monotonous. As a matter of fact, it is scarcely ever found to be so. First of all, the little community of two or three hundred souls—men, women, and children—contrives to find sufficient fund for amusement in itself, in all the varieties of social intercourse.

The progress of each day is marked by some fresh events that, insignificant as they may seem when regarded from a distance, do yet bear the strongest interest to all on board. A glimpse at some distant land, the signalling or speaking of other vessels, the appearance of strange birds and fish, the passage into different climates, the excitement of a storm, or the opportunity which a calm gives for general junketing; all such incidents are looked upon as a real gain by the voyagers, while there is always something stirring on board to divert and enliven them.

All kinds of games are resorted to, many more, in fact, than landsmen have any idea of; a vast amount of reading is done; there are sure to be one or two on board who know how to spin a yarn with due effect; some are musical, and others can sing. Concerts, lectures, theatricals, and dances are got up; while, as there is generally a due admixture of the sexes, not a little flirting and downright courting is carried on; and, lastly, if there is any quarrelling and bickering, the differences of those who engage in it afford much amusement to the rest....