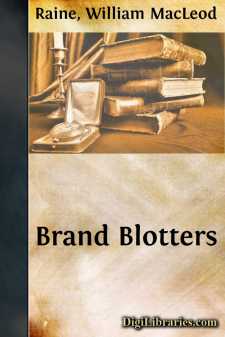 The tenderfoot rose from the ledge upon which he had been lying and stretched himself stiffly. The chill of the long night had set him shivering. His bones ached from the pressure of his body upon the rock where he had slept and waked and dozed again with troubled dreams. The sharpness of his hunger made him light-headed. Thirst tortured him. His throat was a lime-kiln, his tongue swollen till it filled his mouth.

If the night had been bad, he knew the day would be a hundred times worse. Already a gray light was sifting into the hollow of the sky. The vague misty outlines of the mountains were growing sharper. Soon from a crotch of them would rise a red hot cannon ball to pour its heat into the parched desert.

He was headed for the Sonora line, for the hills where he had heard a man might drop out of sight of the civilization that had once known him. There were reasons why he had started in a hurry, without a horse or food or a canteen, and these same reasons held good why he could not follow beaten tracks. All yesterday he had traveled without sighting a ranch or meeting a human being. But he knew he must get to water soon—if he were to reach it at all.

A light breeze was stirring, and on it there was borne to him a faint rumble as of thunder. Instantly the man came to a rigid alertness. Thunder might mean rain, and rain would be salvation. But the sound did not die away. Instead, it deepened to a steady roar, growing every instant louder. His startled glance swept the cañon that drove like a sword cleft into the hills. Pouring down it, with the rush of a tidal wave, came a wall of cattle, a thousand backs tossing up and down as the swell of a troubled sea. Though he had never seen one before, the man on the lip of the gulch knew that he was watching a cattle stampede. Under the impact of the galloping hoofs the ground upon which he stood quaked.

A cry diverted his attention. From the bed of the sandy wash a man had started up and was running for his life toward the cañon walls. Before he had taken half a dozen steps the avalanche was upon him, had cut him down, swept over him.

The thud of the hoofs died away. Into the open desert the stampede had passed. A huddled mass lay motionless on the sand in the track of the avalanche.

A long ragged breath whistled through the closed lips of the tenderfoot. He ran along the edge of the rock wall till he found a descent less sharp, lowered himself by means of jutting quartz and mesquit cropping out from the crevices, and so came through a little draw to the cañon.

He dropped on a knee beside the sprawling, huddled figure. No second glance was needed to see that the man was dead. Life had been trampled out of him almost instantly and his features battered beyond any possible recognition. Unused to scenes of violence, the stranger stooping over him felt suddenly sick. It made him shudder to remember that if he could have found a way down in the darkness he, too, would have slept in the warm sand of the dry wash....