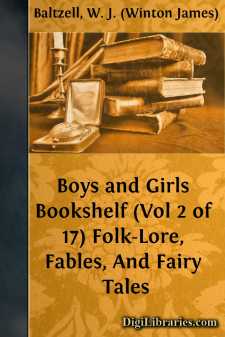 The day is dull and dreary,And chilly winds and eerieAre sweeping through the tall oak trees that fringe the orchard lane.They send the dead leaves flying,And with a mournful cryingThey dash the western window-panes with slanting lines of rain.My little ’Trude and Teddy,Come quickly and make ready,Take down from off the highest shelf the book you think so grand.We’ll travel off together,To lands of golden weather,For well we know the winding road that leads to Fairy Land.

A long, long road, no byway,The fairy kings’ broad highway,Sometimes we’ll see a castled hill stand up against the blue,And every brook that passes,A-whispering through the grasses,Is just a magic fountain filled with youth and health for you;And we’ll meet fair princessesWith shining golden tresses,Some pacing by on palfreys white, some humbly tending sheep;And merchants homeward faring,With goods beyond comparing,And in the hills are robber bands, who dwell in caverns deep.

Sometimes the road ascending,Around a mountain bending,Will lead us to the forests dark, and there among the pinesLive woodmen, to whose dwellingCome wicked witches, tellingOf wondrous gifts of golden wealth. There, too, are lonely mines.But busy gnomes have found them,And all night work around them,And sometimes leave a bag of gold at some poor cottage door.There waterfalls are splashing,And down the rocks are dashing,But we can hear the sprites’ clear call above the torrent’s roar.

Where quiet rivers glistenWe’ll sometimes stop and listenTo tales a gray old hermit tells, or wandering minstrel’s song.We’ll loiter by the ferries,And pluck the wayside berries,And watch the gallant knights spur by in haste to right a wrong.Oh, little ’Trude and Teddy,For wonders, then, make ready,You’ll see a shining gateway, and, within, a palace grand,Of elfin realm the center;But pause before you enterTo pity all good folk who’ve missed the road to Fairy Land.Cecil Cavendish

There was once a lovely Princess who had such beautiful golden hair that everyone called her Goldenlocks. She possessed everything that she wanted: she was lovely to look at, she had beautiful clothes, and great wealth, and besides all these, she was the Princess in a large kingdom.

In the country next to that of Goldenlocks there ruled a rich and handsome young King. When he heard about the charming Princess he decided that he wanted her for his Queen. The question was, of course, how to make her feel that she wanted him for her husband!

This young King did not go about his wooing after the manner of people that you and I know. He called one of the chief men of his court, and said: “You have heard of the lovely Princess Goldenlocks. I have determined that she shall be my bride. I want you to go and see her; tell her about me, and beg her to become my Queen.”

Then the King ordered a great number of horses brought for the ambassador, and he directed his men to send more than a hundred servants also....